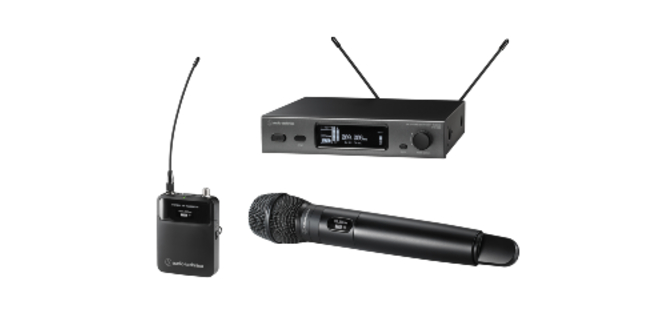 Audio-Technica make equipment that spans this spectrum from affordable trad kit and 2.4Ghz systems through to the 5000 gear pushing the top end. Here we’re looking at the new 3000 series which would be a very definite step into professional quality. The new kit has some significant technical advances, including 60MHz of tuning bandwidth – more than twice that of the 3000 V3 systems.

With frequencies ever more congested, more tuning bandwidth is a good thing and it’s worth noting that the big brother 5000 Series system offers a whopping 230MHz of bandwidth. In the marketing stakes the 5000 Series is very up front about being true diversity – meaning two discrete receiving circuits inside each receiver and not just two aerial systems.

The 3000 is also a ‘true diversity’ system, though you’ll have to dig a little harder to find this nugget of info. I had the chance to look at a handheld system featuring the ATW-R3210 rack mount receiver and the ATW-T3202 handheld transmitter with the ATW-C510 capsule. For lavalier use I had the ATW-T3201 body-pack transmitter and an AT831cH miniature cardioid condenser lavalier microphone, though I take a slight issue with ‘miniature’ here – from memory the 831 is bigger than an ECM-50.

Before working through the details, I thought I would do a quick walk test with the handheld and a leading brand’s 2.4GHz handheld system. This is not a line of sight but in a complex building, and the latter was somewhat of a disappointment. The 3000 system’s range was just so much better as to make the contest null and void. In one sense that might be expected as radio waves get more directional with higher frequencies and the 2.4GHz gear is running at about four times the frequency of the Audio-Technica kit. Which is why an old pal of mine often used to carry a VHF system, just in case he needed a little extra range. I’m sure in a line of sight test things would be closer, but it just goes to show.

Before we turn to more strenuous testing, a word about features and technology. The R3210 receiver has a very fetching and bright mono display carrying all sorts of helpful info and the usual press-and-turn knob for menu selection. Both the beltpack and handheld feature similar bright displays with all the information you need in smaller chunks. The 3000 system has group scanning coupled with infrared communication between the receiver and the transmitters. In an ever busier RF environment, having group scan is going to get a multiple mic system up and running with maximum efficiency. The scan function includes variable threshold so you can select for maximum channels and live a bit dangerously, or maximise stability at the cost of fewer open frequencies. The sync function is also a real time saver – I’ve always found IR a bit hit-and-miss but it’s a joy to sync all your settings in one hit from the receiver to the transmitter.

Reaching back in time, I had a sterner trial for the 3000 beltpack system – my Micron Explorer kit, now a bit long in the tooth but still getting the job done. Even when I bought the kit it was a little hair shirty. You don’t get a nice OLED display like the Audio-Technica, or indeed lovely menus. Instead, Micron supplied not one but two tweaking screwdrivers and a couple of LEDs on the receiver. The Micron’s radio performance is very good indeed and I’ve loved it and relied on it despite the idiosyncrasies. Even though the Explorer is a battery powered receiver I expected it to best the 3000.

A few years ago I compared the Explorer to a big name system with all the displays, bells and whistles and the Micron’s RF performance ruled. So off I went pushing the RF to the limit and just over – no line of sight here either. I was somewhat surprised that it was very, very close, but if I had to pick a winner it would be the Audio-Technica. Ten years of abuse, no maintenance etc. must be factored in for my Micron kit, but nonetheless a very confident performance from the 3000 Series system.

I used the 3000 Series handheld on a couple of gigs as a vocal mic without complaint. There is a range of capsules available from Audio-Technica with ‘industry standard’ screw thread including condenser capsules and models more optimised for stage use. The receiver has balanced and unbalanced outputs and unusually a ground lift for addressing hum problems.  Both the beltpack and the hand take two AA batteries, and have charging terminals if you want to run a rechargeable regime alongside A-T’s custom chargers. On the beltpack there is a now pretty much standard dual clip, along with a fold down flap arrangement that reveals both batteries and controls. A slight gripe for newbie users is that Audio-Technica love button text that is black on black, and given you’ll be using these in low light with fading eyesight, give us old guys a break Audio-Technica!

In the handheld, the body cover unscrews to access the battery compartment and the major controls including the power switch. I have mixed feelings about this. I know if you put the power switch on the body of the mic then the talent will undoubtedly switch it off at the crucial moment, but we put a mute switch on there, and I often find seconds count when pushing a performer on stage. I’d rather not be scrambling to unscrew the body cover of a mic if the call comes early. Instead of power the bottom of the A-T handheld you get a multi function button which is – I have to admit – pretty cool. This can be configured to mute the mic, disable the RF and even switch to a backup frequency in concert with the receiver. In fact, backup is really ‘swap over’ – you can keep hitting it to swap between your two chosen frequencies. Neat eh? Now if only they had a further option to make it the power on switch! On the beltpack you get the function button but also a dedicated mute switch.

So what do we think? I love all the gadgets and features, but in truth if I had to wear a hair shirt and wield a screwdriver and got better RF performance, I would probably go down that route. It seems with the Audio-Technica 3000 Series system you get a lovely slice of both, rather than either/or. It really is nice gear, and deserves to be on your shopping list if you want performance and features. And who doesn’t?

– Frequency scan and IR sync functionality for ease of setup

– Ability to switch to a backup frequency in case of interference