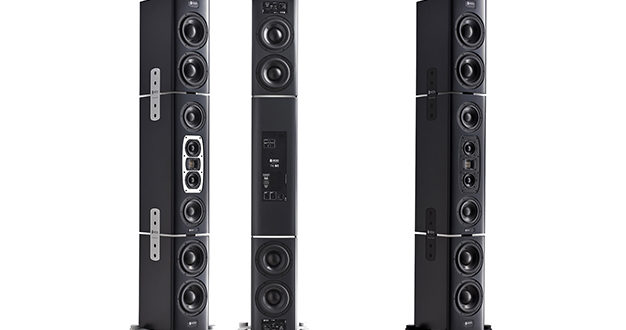 Mike Thorne, an audio friend and owner of Rimshot Studios in Kent, recently told me of an upcoming HEDD main loudspeakers launch and demonstration at the studio organised by UK distributors CUK Audio – and asked if I would like to write something about them.

As those following my speaker reviews know, the usual MO is to set up units here for audition in the known acoustics of the Lowland Masters mastering room, and work with them for anything up to a couple of weeks to shake out their plus and minus points. In this case, the short timescale in a less controlled environment felt like a daunting prospect, but as it turned out I needn’t have worried.

Heinz Electrodynamic Designs, HEDD, is a German company based in Berlin and founded in 2015 by father and son team Klaus Heinz and Frederick Knop. Managing director Heinz has a long history of designing loudspeakers for many different uses, and was the founder and head of research and development of the ADAM brand; Knop is a mastering engineer and musicologist, and looks after HEDD’s sales and marketing.

After achieving early success with the active Series One range, including the near- and mid-field Type 20 and 30 three-ways, the company took the bold step of introducing a modular system of full-range main monitoring as a no-compromise statement of intent to offer the best in sound quality, resolution and dynamics.

The HEDD Tower Mains systems are made up of two active building blocks, the TM80 main monitor and TMS36 subwoofer, both closed-box or non-ported designs. The 280x835x400mm (11x33x16” WHD) TM80 has five drivers: two 7” woofers, two 4” midrange units (both woofers and mids have new ultra-stiff honeycomb sandwich cones) and a proprietary air motion transformer tweeter (AMT). Frequency response is linear after a -6dB point at 80Hz up to a bat-eared 50kHz powered by three 300w ICEpower Class D amplifiers, the drivers being arranged in a quasi D’Apollito symmetrical array either side the tweeter to help reduce floor and ceiling reflections. The TMS36 sub unit measures 280x580x400mm (11x23x16”), covers a frequency range from 20Hz (-3dB) to 80Hz (-6dB) and has four 9” drivers, two each at front and back to help cancel out cabinet resonances. Amplifiers are two 600w ICEpower, wired so each driver may potentially be driven at 300w. 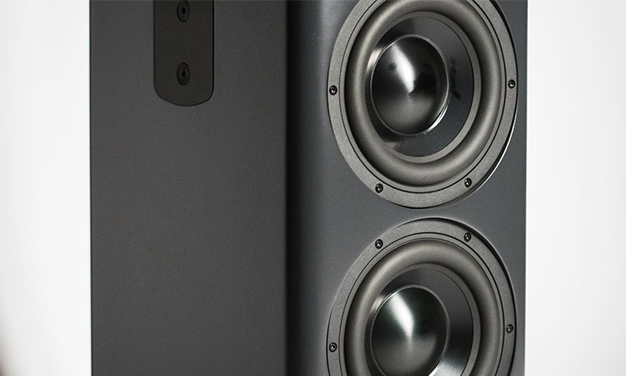 The modularity of the system comes into play in a number of ways: start point is the TM Standard Tower, consisting of a TMS36 sub on the floor, topped with a TM80 main monitor joined to the sub with metal links, placing the AMT tweeter at around seated ear height. Then there’s the TM Extended Tower (the format heard at the demo), the same as Standard but with an additional TMS36 at the top to make a large floorstander just over an imposing 2m (6’ 6”) tall.

And there’s more: a Standard pair of cabinets may be combined so the TM80 is mounted on a wall and the TMS36 placed nearby and turned 90º; or an Extended group could have the TM80 in-wall, and one TMS36 on top of the other out in the room. All versions may be used for both stereo and surround, making the building blocks of the system extremely versatile. Finally, although the audio input to the tower systems is analogue by default, HEDD also provide a card, the HEDD Bridge (currently Dante-compatible), to integrate the towers into digital workspaces via audio over IP protocol where required.

There were about 20 of us at Rimshot for the evening demo, a cross-section of people working in music and sound including engineer/producers, DJs, bloggers, musicians and distributors. After a talk by the two company principals explaining some of the thinking and technology behind the marque, CUK’s Steve Barton played a series of reference tracks both of his own and from attendees via a laptop-based system over an extended period.

The HEDD Tower Mains come with a plug-in, the Lineariser, where by recording room impulse responses both the frequency and phase response may be flattened: effective though this might be judging from similar systems I’ve heard, it’s worth noting the Lineariser wasn’t used at the demo. In fact the only concessions made for compatibility with the tracking room at Rimshot, a fairly large, medium-live space, were tall studio screens placed behind the speakers to mitigate rear wall reflections and a small reduction in low frequency output. This in a room intended for performance rather than playback, signalled to me that we might be in for something out of the ordinary.

While we as a group auditioned the system, which played into a stereo listening triangle roughly 3-4m/10-13’ per side, a number of things became apparent. Firstly, this was not like some tower speakers of the past: even bearing in mind the large listening area, the ‘sweet spot’ was huge, so there was no need to jockey for position to hear a good presentation; next, linearity in the setup was commendably wide, including a very natural and informative bass response where I could, for example, easily hear the cutoff point of highpass filters in a couple of pieces I’d mastered. 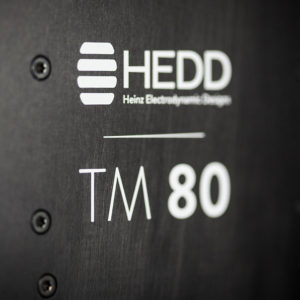 Where there was no bass in a reference below a certain point, none was reproduced as ‘phantom bass’, something I’ve found to be one of the indicators of a true monitor and a relative rarity. Another point was the unusual combination of extraordinary resolution and listenability of the Extended Tower, where one could hear deeply into any piece played from the purest classical to the most ‘out there’ electronica. My experience (and I don’t think anyone present would disagree) was that the best of the material was displayed in exquisite detail while other pieces’ faults were mercilessly exposed – but presentation somehow always remained a good listen.

A couple of standout moments for me from the demo: I noticed in a number of the recordings with male singers that the chest part of voice from the low mids upward was particularly cleanly reproduced, something I’ve found lesser loudspeakers can struggle with. Also, the studio has a great-sounding Bechstein piano, which was played by various people during pauses in the proceedings. At one point I was in the studio’s foyer and heard a particularly well-executed performance through the open door, went to see who of our number was the pianist and found it was a recording played through the Towers; someone else present also independently noticed this.

The HEDD TM Extended Tower system is in a select group of the very best loudspeakers I’ve personally heard, and its resolution may well be unrivalled. Pricing also seems thoughtfully placed, above the new generation of smart cardioid monitors but well below equivalent models from the best-known industry names.

In addition, the modularity provides a unique possibility to turn a Standard setup into an Extended later for greater headroom and power when finances permit. All things considered, for me there’s a new star in the loudspeaker world, and I think one thing that’s needed for the HEDD Tower Mains to be a considerable success is for potential buyers with sufficient space to abandon preconceived ideas they may have about large tower speakers, and simply listen.