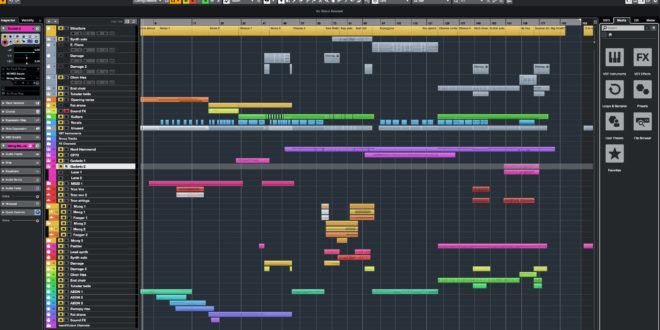 Stephen Bennett rounds up all the new features in the latest version of Steinberg’s renowned DAW, which turns 30 years old this year…

2019 marks the 30th anniversary of the first version of Steinberg’s venerable Digital Audio Workstation. Cubase was the first DAW to combine MIDI and audio recording with virtual instruments and effects, and VST is a Steinberg technology which the company sensibly opened out for the use of other companies. Version 10 is the latest iteration – we seem to get a new version each year at the moment – and comes in various flavours to suit differing applications and budgets. This review covers the features of Cubase Pro 10, with Artist 10 and Elements 10 versions also available, each featuring a subset of features, with discounted updates for long-time users.

Version 10 is more of an evolution of Cubase rather than offering any radical change, though there are some important new features and workflow improvements in the update. For those wanting to dip their feet into the Cubase pond, there’s also a trial version available from the Steinberg website.

My first automated mixing system didn’t have any detailed control over level changes – the SSL 4000 E being a tad out of my budget! Instead, you could take ‘snapshots’ of the state of the mixer and recall these, one by one, using MIDI timecode information as the song progressed. Cubase 10 kind of reflects back to this idea, but in a more sophisticated form. MixConsole snapshots save the current state of the mixing console for instant recall. You can add production notes to these snapshots and decide which parts of a mix (EQ, levels, individual tracks etc.) to recall. It’s a doddle to use and makes the production and managing of different mixes easier, which is extremely important for today’s ‘just in time’ production workflow.

Currently, snapshots don’t save plug-in automation – which could limit their use if you commonly automate these functions – but I hope Steinberg add this feature soon. The channel strip has been revised both in appearance and ergonomics and there are some changes in the appearance of windows and dialogue boxes, most of which won’t faze experience Cubasists one bit. You can now drag and drop VST effects and instruments onto tracks and grab an image of your third-party software to display when selected – those supplied with Cubase already have these. The colour palletes and Add Track dialogue boxes are now ‘floating’ and so make small but important improvements in workflow, as do draggable mixer channel strips. The bundled plug-ins have received some cosmetic improvements and are now a lot nicer to use on higher-resolution displays.

The new Auto Alignment feature allows you to line up tracks to a reference in a similar fashion to automated ADR software such as VocALign. For music uses, being able to quickly align backing vocals or percussion will really speed things up. Although Cubase isn’t usually the first DAW you’d turn to for post-production – though there have been some improvements for those who are composing for film – it’s useful to have the facility and it works extremely well. The choice of Time Stretching or Shifting Alignment makes it extremely useful for lining up multi-miked instruments and correcting phase issues.

Speaking of pitch ‘n time processing, Cubase’s VariAudio has received a significant algorithm upgrade and can really compete with third-party solutions. You can change the pitch, position, formant and volume of the separate audio ‘blobs’ without recourse to menus or modifier keys. It’s extremely easy to use and the quality is right up there with Auto-Tune and Melodyne – though it lacks the latter’s polyphonic editing modes. Steinberg says that Audio Random Access 2 (ARA 2) support – which effectively allows Melodyne to work ‘natively’ in Cubase – is imminent. The programme also provides more information about how it compensates for latency, which may or may not be important depending on how you work.

There’s a nice new distortion/audio degradation plug-in, Distroyer, which has an unusual spatial setting alongside the usual filters and overdrive. There are new loops available and the bundled Groove Agent SE 5 has been improved. From the start, Cubase took rhythm programming seriously and most other DAWs still don’t provide a percussion tool as good as the program’s Drum Editor window. Groove Agent SE 5 is the ‘lite’ version of Steinberg’s answer to the likes of FXpansion’s BFD. It now supports 32 velocity layers and the new bundled acoustic samples, called ‘The Kit’, sound very good indeed, as do the new ‘Laser Beams’ electronic sounds that you’ll be using in the ‘Beat Agent’ editor. 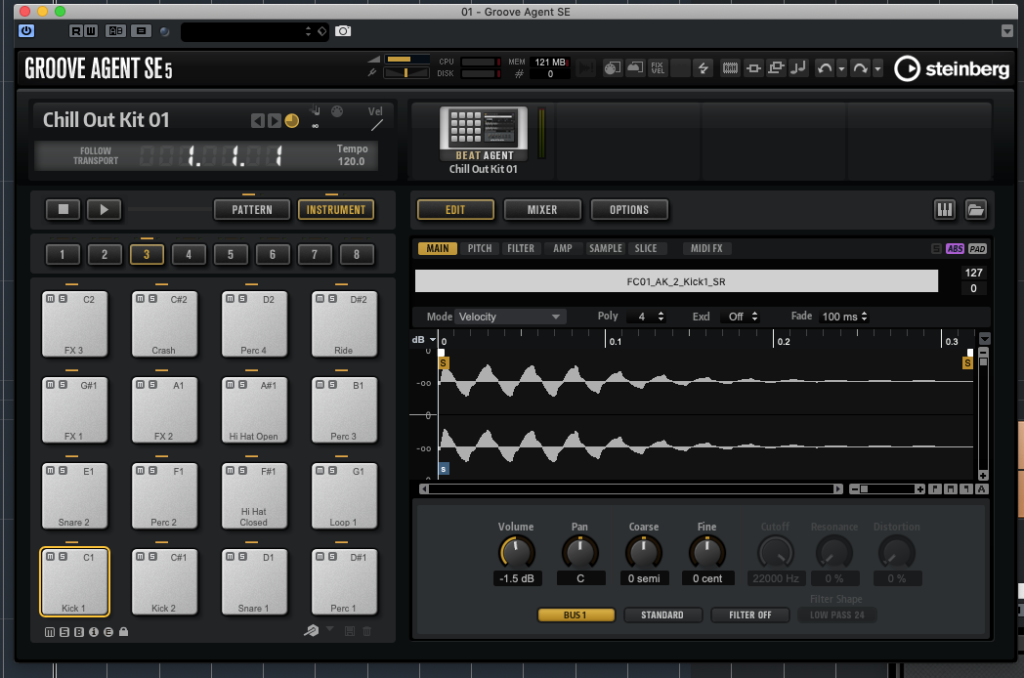 You can also add your own samples. It’s pretty easy to create excellent sounding electronic or acoustic backings for your work, especially with the quality of the effects on offer in the Groove Agent mixer, and you can now export these settings to the Cubase main mixer. Even though I almost always replace sampled percussion with what we laughingly call ‘real drummers’, I find being able to create realistic sounding demos helps to inspire during composition and gives my drumming colleagues some idea of how I want a song to sound. For this application, Groove agent SE 5 gives me pretty much all I need.

Cubase 10 now supports MIDI Polyphonic Expression (MPE) which is good news for those using controllers such as the ROLI seaboard: I really hope we are at the cusp of a polyphonic after-touch explosion! There has been some tweaking to the audio engine and the program felt snappier than 9.5 on my ancient Mac Pro. Cubase now supports the AAF transfer format alongside OMF, which should make collaboration with colleagues using different DAWs easier. With a nod to the future, Cubase offers tools that will be useful to virtual and augmented reality and ‘immersive audio’ producers.

This VR production suite consists of a series of plug-ins, a third-order Ambisonics bus, an HMD connector for head tracking, a tool for creating binaural audio from non-binaural sources and a VR panning device, which is included in the VST Multipanner plug-in. In all, it’s a comprehensive package, and with this particular area of audio production receiving a lot of attention right now, it’s good to see Steinberg taking this field seriously.

Most contemporary DAWs are mature products with each iteration bringing incremental improvements in ergonomics, while features and specifications are swapped between products like genes between bacteria. Sometimes, as in Cubase 10’s case, looking to the past has brought improvements in workflow. If you’re a Cubase 9.5 user, the version 10 update is, as we say, a ‘no brainer’ and will feel familiar under the mouse right away. If you’re coming to Cubase for the first time, the software continues to improve and has become a powerful cross-platform audio production and composition tool that will provide for most users all of the features necessary for whatever area of audio they work in, from electronic dance music to composition for film. It’ll be interesting to see what Steinberg do with their best-selling product as it moves into its early thirties.