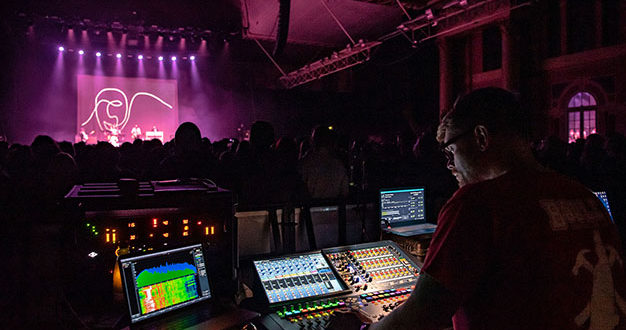 James Coghlan was the systems tech, working with Adlib’s Alan Harrison to ensure that band engineers Luke Buckbee (FoH) and Johnny Stephenson (monitors) had everything they needed.

Coghlan had completed a short run with the band earlier in 2018 where Adlib supplied a CODA AiRAY system for some club and academy shows which didn’t have access to a house PA. Buckbee was so impressed with the CODA that he chose it again for this arena tour and requested Coghlan back as systems engineer.

The system comprised AiRAY and ViRAY supplemented with flown S2-F low frequency extensions along with a broadside array of eight stacks of CODA SCP-F subs on the floor for even sub coverage.

Three CODA APS speakers per side were used as infills, with four HOPS8’s for front fills.

CODA was spec’d for its small and compact box size, extremely light weight and sound quality, which was perfect for the smaller theatres and rooms they played in 2018 where both points, weight loadings and truck space were limited.

The AiRAY was toured with the 90-degree AiCOUPLER (waveguide) and the ViRAY with the 120-degree ViCOUPLER waveguides. Coghlan positioned the ViRAY beneath the main hangs as down-fill for its increased horizontal dispersion to help cover the front rows. 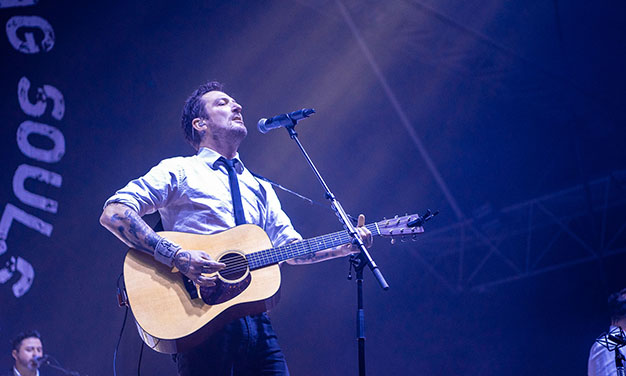 In the London gig at Alexandra Palace, a long narrow box of a room, they dispensed with the side hangs and instead used the ViRAY in small ground stacks to fill the sides, then flew the AiRAY as two delay hangs. They used an Adlib fibre control system, with Dante as the main protocol between FoH and stage, and the fibre network also carrying signal to control the amps.

An Outline Newton was utilised as the master console matrix which took in analogue and AES from Luke’s PRO2C FOH console and the DiGiCo SD12 desk doing the support mix. The outputs from the Newton then fed a Lake control system, which fed the amps with both LiNET and an analogue backup. They toured 12 x Linus14 amps and 25 x Linus10s in total, all connected to a Mac Mini at FoH, running Linus Live to control the amplifiers.

With Frank’s hectic live show schedule, the band provided their own consoles – the PRO2C for FoH and a DiGiCo SD9 for monitors, and also had their own IEM monitor system.