Most audio engineers would tell someone with the requirement to fill a large space with high-fidelity audio to “want loud, think big”. Obtaining a high SPL from a modestly sized cabinet is possible, but you usually have to trade off fidelity and higher distortion to achieve it – not to mention the heat issues you’d have with the amplification you’d need.

As is so often the case, improvements in design and DSP-based processing have enabled monitor manufacturers ‘to boldly go where no-one has gone before’. With the increased interest in immersive audio, surround dubbing suites and multi-speaker theatre installs, there is a keen requirement for really loud, high-quality, reasonably small monitors.

As Aki Makivirta, research and development director at Genelec puts it, in these types of installation, you often have to squeeze a lot of speakers into a confined space, so their size is vitally important. The Genelec S360 is a two-way powered monitor which measures a relatively diminutive 530 x 360 x 60 mm, putting them into the mid-field bracket while weighing in at a hefty 30kg.

A pair of S360s are capable of generating 130dB at one metre and, alongside the 7382 sub can hit 105dB at a 10 metres distance – a comfortable spread for most of the kinds of places these speaker will end up being installed in. The frequency range of the S360 alone is 36 Hz to 22 kHz (-6 dB), but the lower end is extended considerably by using the 7382 sub. The S360 also features an energy saving mode, the Intelligent Signal Sensing (ISS), that ‘sleeps’ the system if idle but wakes it up when required – it consumes just one watt in this mode.

The enclosure itself is, in many ways, quite unlike other modern Genelecs, being box-shaped, of MDF construction – albeit with a 32mm front baffle – and available in black or white. However, the 1.7-inch titanium diaphragm compression tweeter lies in what Genelec calls a deep cone-shaped Directivity Control Waveguide or DCW. The 10” low frequency driver is based on Genelec’s master series and low-end performance is enhanced by a downward facing port. The speaker sits on four small legs to set the bass free, which the company call an ‘iso-plate’. 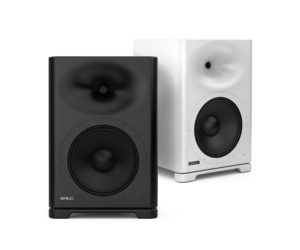 Genelec pays particular attention to phase issues and the speaker’s off-axis response is excellent. The company provides ample documentation, including specifications and calibration curves to demonstrate the efficacy of their design, which is always reassuring to the prospective purchaser. The speaker itself features several mounting points and the integral amplifier can be removed and racked using a special kit, which is going to be very important if it’s going to be used in a confined space.

Alongside the usual power and signal connectors, balanced analogue and digital in and thru, the 250W (woofer) and 100W (tweeter) class-D amplifier has an ethernet interface for setting up Genelec’s GLM network using standard cat5 cables. This network is used by Genelec’s Smart Active Monitor (SAM) digital signal processing system to help compensate for discrepancies in the acoustic performance of any room – and you can read more about SAM in my review of Genelec’s 8331 monitors from November 2017.

The monitors also feature physical tone controls on rear DIP switches if you’re not using the SAM system and Genelec suggest settings for typical applications – the monitor is perfectly usable as a rather good ‘traditional’ studio monitor. The GLM Loudspeaker Manager software also allows the user to monitor the internal temperature of the speakers, input levels and levels to the drivers, as well as input clipping, a digital audio full scale warning and system overload protection for all of the monitors on the GLM network, which can be a mix’n’match of compatible Genelec devices.

The 7382 sub features three 15” drivers driven by a 2500W external amplifier, the RAM SW, which means the speaker can be flush mounted in a convenient location without worrying about heat issues. The sub’s connectors feature analogue LFE and digital connectivity alongside the connector for the speaker system. Using the sub takes the combined system’s low end down to 15Hz – which is going to be essential for those cinematic explosions and monster attacks. The crossover can be set between 50 to 100Hz and has a slope of 48dB per octave. 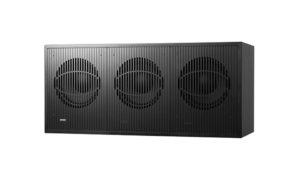 The S360/7382 combination can work with the SAM system to apply correction over the complete frequency range, which could be a make or break deal in an installation that has a constantly changing sonic signature. Genelec also provides ample documentation for the setting up of small surround to large immersive systems, all controllable from the single GLM network, where the surround format and the frequency balance of individual monitors can be calibrated to suit the space. The software can be used to mute monitors and load calibrations from different listening positions, and you can also use Genelec’s 9301 AES/EBU Multichannel Interface that allows 7.1 channels of digital audio to be used with all of the 7300 Series of subwoofers.

I didn’t think that my studio could cope with the high output that the system is capable of producing, so I was glad when Genelec suggested I decamp to Metropolis’ studio C in London to check out the system in a 2.1 configuration. The S360s were placed above the studio’s Neve VR 72 console, while the 7382 was dropped in behind the desk – low frequencies not caring where they emanate from! The raised feet of the S360 act as effective de-couplers from the bench and initial listening at the mix position with some familiar tracks demonstrated the S360s to be an excellent mid-field monitor, albeit with the transient response and stereo imaging that befits a physically smaller system.

The tweeter/waveguide combo acts in a similar fashion to a compression horn, so it’s no surprise that the speaker excels in reproducing the upper frequencies with excellent directionality. The SAM system appeared effective in compensating for the frequency problems caused by the monitor’s placement over the substantial mixing console and the systems’ effect on the output was noticeable wherever you sat in the well-treated studio environment. The ability to adjust the system to suit the room will be extremely useful in theatre or installation applications, as will the ability to tweak each monitor’s response remotely. Turning up the volume did not appear to significantly affect the fidelity of the system and at five metres distance, the audio seemed completely unstressed at volume levels which the listener might be!

I’ve looked at many immersive style installs over the last few years. Most of them are not permanently sited and need to be moved around to different locations with wildly differing acoustics. The compact size of the Genelec system along with the SAM correction facility should help make sure that the audio’s reproduction is optimal wherever the installation resides. Any number of Genelec monitors can be tied to the same GLM network, and the high SPL/high-fidelity output is just what’s needed for modern movie theatres and dubbing rooms. With the S360/7382 combo, Genelec has indeed boldly gone – even if they still ‘cannae change the laws of physics.’