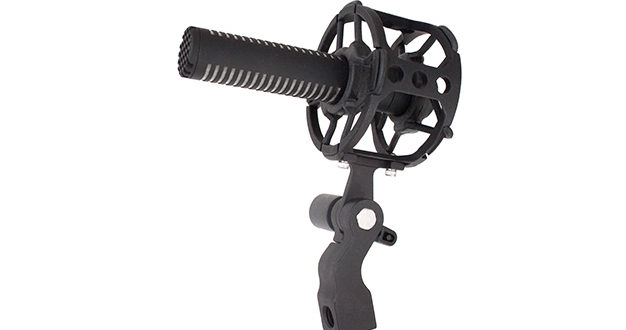 Sanken have a long and noble history in location sound and as innovators of microphone technology. Their COS 11D personal microphone has been an industry staple particularly in drama recording for many years and delivering high quality audio from a personal mic is no mean feat.

Sanken bill themselves as the world’s most original microphone makers and I’ve always fancied a go on one of the exotic Sanken CO-100K mics which as the name suggests have a frequency response that extends up to 100 KHz. Not that I can hear that high, but I just like the idea of making recordings for the underserved dogs and bats market.

A little more down to earth is Sanken’s range of gun mics. But even here, Sanken have been pushing forward with the CS-3e, which sports three capsules in a line array to produce a highly directional microphone. Which brings us to right now, and the latest addition to the Sanken stable, the CS-M1 supercardioid microphone.

The first thing you notice about the CS-M1 is that it is small, discreet and light as a feather – well as light as a 55mg feather. But don’t worry, it has that special lightness that in your hand does not produce the ‘this is crap’ response but rather ‘this is light and lovely’. The CS-M1 is nicely made and feels like a quality product.

But what sort of quality? Well the bottom line is everything these days and if we review the standard hypercardioids in a professional sound bag we might well find a petite Schoeps CCM 41 or the more standard CMC6 MK41 combination, the Danish option would be a DPA 4018 and Sennheiser have the MKH 50. These are all spectacular microphones, however the CS-M1 has a handy price advantage here; in fact it is as much as fifty per cent cheaper. Closer to the Sanken in price is the Sennheiser MKH 8050 but that is still nearly a third more.

Rooting around in my bag for something a bit more comparable in price I picked out the Neumann KM 185, a hypercardioid of similar dimensions though about 20gms heavier. Having been around for donkey’s you can get a 185 and have some change for the price of the CS-M1.

The second thing that strikes you when you examine a CS-M1 with a more run of the mill hypercardioid like the 185 is that the CS-M1 has a proper interference tube on the front. The tube is only about 50mm but is designed to deliver a bit more suck on the front and produces a supercardioid response. The down side of interference tubes is the interference – use them inside in a reflective environment and you can get phasing issues that sound nasty, which is why you would switch away from your gun mic in the first place. Something to think about.

The third thing that really stands out is the sensitivity of the microphone. As an electret it is at least one louder than pretty much everything else in the bag – I needed 10dB less gain as compared to the Neumann 185. Good news if you worry about noisy preamps. Comparing the spec is interesting; both mics have a top end peak, the CS-M1 at 8k and the 185’s is a little further up at 10. Both roll off the top and the bottom end with the effect being more pronounced for the Sanken.

Indoors, the 185 and the CS-M1 were very close in audio quality. In theory the 185 offers a bit more at the top and bottom but in practice I was mostly hard pushed to identify either mic’s sonic signature.

Working in reverberant rooms and listening back closely maybe the 185 carried more bottom end weight – was that tube impacting? But to be honest I’m splitting very fine hairs here. One of the key areas of location sound is what your mic is doing in the off axis dimension. If you have peaks and troughs in your off axis frequency response this can be a deal breaker. Again I found the Sanken no slouch as it is a little bit tighter than a standard hypercardioid, but that extra directionality did not seem to come with any off axis nasties. On a very positive note, the Sanken is built for location, less mechanical handling noise and you can swing it on a pole with much less whoosh. To be fair the Neumann is a studio mic. The Sanken does come with a windshield but serious swinging or outdoor work will need something more heavy duty.

And one of the major challenges with a location mic is good suspension and windshield options. This is particularly true of the CS-M1 as you don’t get any form of clip when you buy it! Come on Sanken, give me something to work with here. Very short mics like the Sanken are hard to support and this is doubly true due to the shortness of the back end of the mic because of the interference tube at the front. I resorted to the classic AKG SA40 just to get it on a stand, be warned you will need a clip of some sort.

The major players in windshields for serious location work are Rycote and Cinela. You need one of these if you are going to work up high, on the coast or in Wales. The best solution will be a Cinela Cosi or a Rycote Cyclone – please lie down before checking the prices! But remember the best mic outside is useless if the blasted audio is unusable. Check out the great Cosi video on the Cinela site. Rycote also offer some more affordable solutions – I used one of their In Vision
inv-6 mounts to pole the CS-M1, add the right softie and you are underway without breaking the bank.

So is the CS-M1 a one trick pony? A microphone at home in a location bag but nowhere else? Well given the bass roll off, you are not going to reach for the CS-M1 as first choice for an organ recital but I thought I would offer it a stern test and slip the CS-M1 into an orchestral gig with the BBC National Orchestra of Wales. Here the CS-M1 does have to hold its own with top end mics from Schoeps, DPA and Sennheiser – the concert was in the Brangwyn Hall in Swansea and the Sanken did duty as a woodwind mic and passed with flying colours. This is good enough to serve as an orchestral spot mic. So Sanken have not produced a specialist mic for limited applications, rather the CS-M1 is a decent mic for a range of tasks.

In summary, the Sanken CS-M1 is a worthy addition to the Sanken range of location mics. It doesn’t offer the ruler flatness of a Schoeps hypercardioid but the engineering choices Sanken have made serve location recording very well indeed. There are sound recordists who believe in a ‘brand sound’ – they have Sanken personals and Sanken gun mics and so adding a Sanken super cardioid is a no brainer. I think the quality of the CS-M1 stands on its own merits and the price point is pretty attractive for a professional mic.