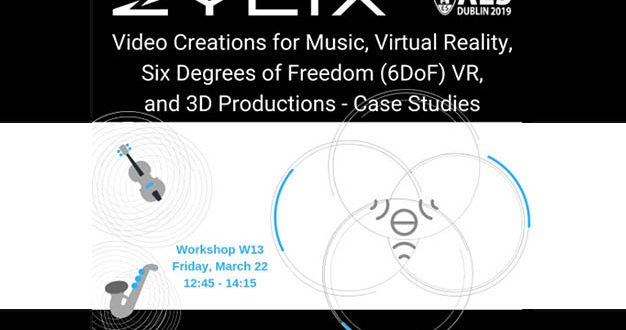 Zylia, a specialist in the field of 3D audio recording and production, has announced that execs from the company will join other industry experts at AES Dublin 2019 and at the 2019 AES International Conference on Immersive and Interactive Audio in York, England, to discuss creation of immersive audio scenes for virtual reality (VR) and music production.

"The AES events in Dublin and York offer great opportunities for us to provide practical advice on how to best capture immersive audio,” said Tomasz Żernicki, co-founder and chief technology officer of Zylia. “We’re seeing a lot of interest in our 360-degree recording technology and a high demand for guidance in maximising the potential of spatial recordings that capture the entire sound scene."

At AES Dublin, where the Convention is being held for the first time ever this month, Żernicki will chair a March 22 workshop titled "Video Creations for Music, Virtual Reality, Six Degrees of Freedom (6DoF) VR, and 3D Productions — Case Studies."

The workshop’s panel of professional audio engineers and musicians will include Przemysław Danowski from the department of sound engineering at Frederic Chopin University of Music in Warsaw, Poland; Hans-Peter Gasselseder of Aalborg University of Aalborg, Denmark; Maria Kallionpää of Hong Kong Baptist University in Hong Kong; and Eduardo Patricio, sound engineer and designer at Zylia.

The workshop will examine spatial audio-video creations in practice. Panelists will talk about how their 360-degree, 3D, and ambient productions combine sound and vision and discuss spatial recordings of concert music. The workshop will focus on the usage of spherical microphone arrays that enable users to record the entire 3D sound scene as well as 6DoF VR. Panelists will discuss how separation of individual sound sources in post-production and Ambisonics enables creatives to achieve unique audio effects.

• 2019 AES International Conference on Immersive and Interactive Audio will be held March 27-29 at the Contemporary Music Research Centre at the University of York.