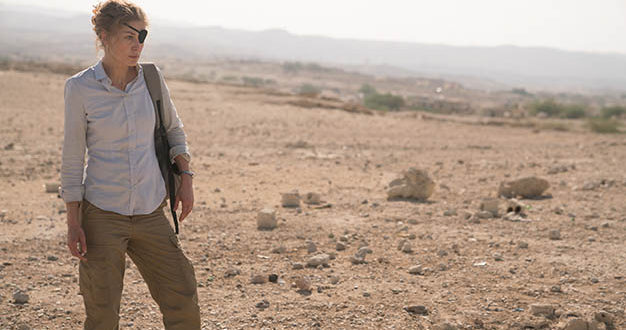 What does a warzone sound like? You can hazard a guess at the sort of sound effects you might need to add in post-production, but for A Private War director Matthew Heineman, estimates were not good enough.

Nominated for two Golden Globes, docu-drama A Private War is award-winning documentary maker Heineman’s first feature-length film. It retells the extraordinary events in the life of the late American journalist Marie Colvin, who reported from areas of extreme conflict for The Sunday Times during her 27-year career as war correspondent. She died in 2012 while covering the siege of Homs in Syria. For Heineman, it was imperative that her story was retold authentically – and matched by true-to-life soundscapes.

The man tasked with the job of packaging up the movie’s audio once filming was complete was re-recording mixer Andrew Stirk. His previous experience working on theatrical documentaries – such as 2012’s BAFTA-winning The Imposter – meant he could draw on his technical ability to create the level of realism Heineman was looking for.

“In our first meeting with Matt, we quickly gauged what type of film he was hoping to make,” Stirk tells AMI. “He wanted to make it heavily referenced in reality. He didn’t want anything over the top in terms of Hollywood sound effects, he wanted it pretty gritty, which also reflects his approach to documentaries. I guess authentic was the buzzword.”

As I imagine many people reading this haven’t experienced the real sound of a warzone, neither had sound designers Paul Davies and Bernard O’Reilly. But they did get to speak to Colvin’s photographer, Paul Conroy (played by Jamie Dornan in the film), who also worked as a consultant during the making of the film.

To “heavily reference” the film in reality, the designers needed to get an insight into what can be heard from a battlefield on any given day. Is a warzone constantly filled with sound? Are there large patches of silence during the daytime? Does the atmosphere change at night? It’s this level of detail that went into A Private War that makes it difficult to watch at times, achieving the uncomfortableness of reality that Heineman was keen to recreate.

This ground-level realism also gives the drama a documentary feel – and the sound is a huge part of authenticating that. For example, actors filmed in the crowd scenes were actually from the war-torn countries shown on screen: locations like Sri Lanka, Iraq, Afghanistan, Libya and Syria, meaning the dialogue could be understood on a dialectal level.

Stirk continues: “Matt wanted all of the crowd’s speech translated individually, which is something I’ve not experienced before. Each crowd was very specific and tonally correct for those different locations. You’d have local dialect in there – it wouldn’t just be general Afghanistani. When we were mixing the film, all of the crowd had an English translation next to it so we knew exactly what that person was saying, meaning it could be positioned very carefully in the background. It was so important to use real live recordings from the shoot, because you cannot recreate that level of authenticity in ADR.”

Once filming was complete, the director presented the sound department with a challenge that Stirk says is rare in his experience of working on films (and he’s worked on a lot in his 20-year-career, including King Arthur: Legend Of The Sword, You Were Never Really Here, and the Resident Evil franchise).

“We didn’t have a huge budget for the audio – it was budgeted as a 5.1 mix, so it was all in one Pro Tools machine. We pre-mixed it all at my studio near Milton Keynes and once we’d finished that, Matt came and reviewed it – kind of like part one of the final mix.

“We did the final mix in the Post Republic in Berlin. As it was all in a single ProTools machine, it was fairly easy to transport across there. We played the whole film back, made loads of notes, and got stuck in. On the second day of the final mix, Matt said: ‘I wonder what it’d sound like in 7.1?’

“As everything was prepped in 5.1, that was a bit of a technical challenge. I wasn’t sure if it it’d work or not at first. There was an easy way we could have done it, which is where you upscale a 5.1 mix to a 7.1, but that wouldn’t have been all that satisfactory. So instead, we decided to do it the hard way – but the better way – which was effectively to copy everything that’s been made on a 5.1 aux and put it on to a 7.1 aux.”

Why did Heineman want to convert all of the audio at such a late stage of the film’s process? Again, authenticity was key. “Matt wanted the sounds to be coming from behind us,” says Stirk. “We needed to have a sonic build throughout the film. Marie suffers from PTSD, and has flashbacks reflecting her experiences which gradually become more horrific throughout the film. From a sound perspective, these needed to become more horrific each time she went back to this dark place, I guess. Each time she was in a warzone, the warzones had to step us as well, and had to get gradually worse. Eventually we got to Homs, in Syria, at the end – that was pretty horrific.”

I ask Stirk how it was to watch this realistic footage over and over when re-recording the mix. “When you first watch it, it’s pretty harrowing to think this is actually what happened to this person. Once you get into the film, you start thinking about all the little sound details and how best you can tell the story. So, for a period of time, you detach from the emotional reality of it. But then in the final stages of the film you re-engage emotionally with it again. It’s quite a weird journey to go on when you’re mixing a film. Once you’ve finished the geeky stuff, that’s the point when you get to do the ‘big craft’, where you can emotionally steer the viewers again through [the choices you make with] sound.”