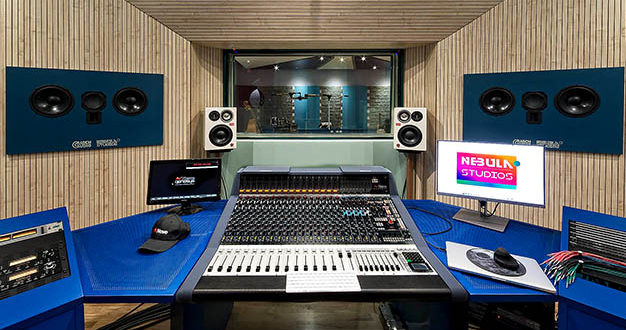 Nebula Studios – located on the outskirts of the Italian city of Milan – have chosen the Neve Genesys G32 as the main feature within their facilities, complete with three rehearsal rooms and a large recording studio.

Edoardo Naridello is the brainchild behind Nebula Studios and says the Genesys G32, which is configured with 16 preamps and eight 88R dynamics modules, and both 88R and 1084 EQs, was the only desk for the job.

“We looked at a variety of consoles, from the vintage SSL 4000G+ to a modern digital Studer desk. The thing that grabbed my attention, was the compact size of the Genesys. You really have everything within reach,” he said. “The 5.1 routing, the Recall, and Encore automation system and, of course, the Neve sound were also key factors for us.”

Naridello went on to praise the hybrid nature of the Neve Genesys G32, which has an analogue signal path with DAW control: “Nebula is designed to work in an old-fashioned manner but with modern thinking – a bit like the Neve Genesys,” he added. “We’re looking forward to working with some of the bands of the independent scene here in Milan, which is quite prolific at the moment!

“The rooms are ideal for those who require a “roomy” sound, such as a big jazz band or a string quartet but also the drums on a blues or jazz recording would benefit from our natural reverberation! The Genesys is really the centrepiece of the sound of Nebula, because everything passes into the summing of the console, benefiting from the Neve sound.”

Naridello summarised by saying that the scalability of the Genesys G32 means that the console can cater for the studio’s growth. “Thinking about the future, the expandability is a massively great thing about the Neve Genesys G32.”