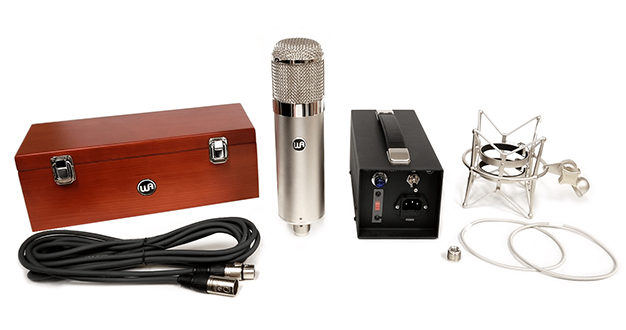 The U47, one of the most iconic microphones in history – the first large diaphragm mic with a switchable polar pattern that fast became an industry standard in the post-war world.

Although it may have been Sinatra’s crooning in the 50s that established the U47 as the go-to studio mic, Nat King Cole and many other artists spanning multiple genres throughout the decades have also sought to harness it’s sound, including The Beatles, David Bowie, Michael Jackson, Beyonce, James Blunt and Radiohead.

The question is: can the magic of the U47 with its high quality components be replicated today, but as a modern vintage sound? As that is what it must surely be, due to the original replacement valves being no longer available since as early as the late 1950s when they wore out. In fact, the VF14M tubes did not have an exact substitute. The general consensus is that the U47 still holds its own but cannot sound like it once did. Only a limited number of around 6,000 U47s were ever produced and so those still in existence today are owned by commercial studios and collectors alike, faced with a compromise when reconditioning these intensely used icons.

This is why perhaps Warm Audio has not attempted to reproduce the original M7 capsule but rather the K47 capsule that superseded it, as authentic classic sounds cannot be truly replicated. That being said, Warm Audio’s president and founder, Bryce Young, refers to it as a “recreation” rather than a replica – reproducing the sound of boutique hardware previously out of reach to so many.

With the original Neumann U47 microphone reaching around $12,000, the Warm WA-47 certainly doesn’t break the bank. There are other competitors in the market with their own “recreations”– Soundelux, Manley, Bock Audio, Pearlman Microphones, Lawson, Peluso Microphone Lab, Flea, Audio-Technica AT4060 and Neumann’s own M 147, but nowhere near Warm Audio’s price point.

Capturing the sound through design

It comes classically packaged, with a wooden box to house the microphone itself, however, the main box to house everything is made from cardboard, so clearly the investment is in the mic rather than the frills.

The WA-47 has a robust body drilled from solid brass and nickel, plated with a brushed look and then crowned with a head basket comprising three different mesh layers replicating the original U47. Its insides are made up of carefully chosen and “auditioned” components from firms around the world, from Australia and France to the Slovak Republic and the US.

Smooth tones are achieved through a lower gain, low noise vacuum tube. It utilises an AMI large core transformer (the original was the BV8) for the smooth top end and “larger than life bottom-end” that we are accustomed to when hearing a vintage condenser. A five-metre 7-pin connector Gotham cable attach the mic to the power supply, where you’ll find an on/off switch and a switchable polar adjustment in nine stages from omni to cardioid to figure-8 (the original only had two patterns to choose from).

A few other reviews have mentioned the unfavourable shock mount when used in the hanging orientation. I personally haven’t found this to be an issue and quite like the buckle type fixing to hold the mic, much like the original. I also like the weight and feel of the WA-47 (a full fat 9lbs); it feels bold, confident and worthy of its modest price tag.

And so what is best to run this WA-47 through its paces? The U47 was known for its cradling of male vocals. Does this microphone recreate the big sound that we might expect from the original big U47? The WA-47 in cardioid sounded big, warm in tone with smooth upper mids. While in omni, more intimate lower mids were present. The changes in tone were subtle and yet noticeable when adjusting through the nine polar patterns (the switching of the pattern seemed to be inaudible): still sitting within that vintage sound but with the ability to boost or even mellow the presence of the vocal. Experimenting with a female vocal and some louder and higher notes, it kept the detail and clarity without being clinical.

I also recorded, for that vintage jazz-feel, both alto and soprano sax and then acoustic guitar, in a cardioid pattern through a Neve 1073 preamp. The results were impressive and the quality was again warm, smooth and round, if however lacking a little “air” in the very top end. I guess this is where spending another £10k or so on an original would help?

Embracing the vintage sound of imperfection, it brought a natural and life-like quality, a sound and class of recording that would compliment any studio’s mic range. It may not be quite as good as other “recreations” that are more than double its price tag, but for its price point of under £1,000 I would venture that the sound of the WA-47 may be unrivalled.

Ross Simpson began his career as a professional dancer/singer, working with the likes of Kylie Minogue and Geri Halliwell. He now runs Woodbury Studios. www.woodburystudios.co.uk