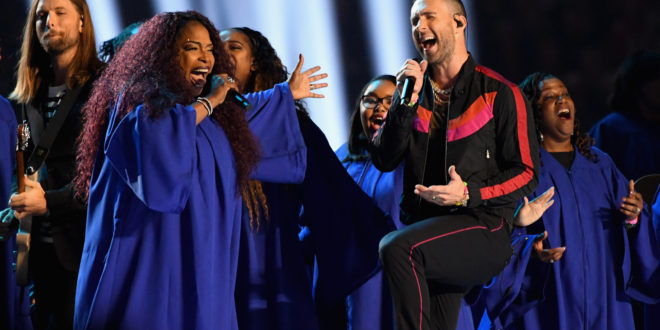 Shure’s wireless systems, including the flagship Axient Digital wireless system and PSM 1000 in-ear monitors, were recently selected to provide consistent sound quality for this year’s Super Bowl in Atlanta, the most wireless-intensive live event of the year.

All RF usage was planned and managed by NFL lead frequency coordinator Karl Voss. Primary audio supplier ATK Audiotek again brought in experts from Orlando-based Professional Wireless Systems (PWS) to meet the challenge of delivering pristine audio for the on-field entertainment. PWS handled Gladys Knight’s rendition of the US National Anthem among other pregame festivities, plus the Maroon 5 halftime show and the referee’s critical microphone.

“It’s our second straight year using Axient Digital as our preferred system, which has several advantages in covering a football field,” said Professional Wireless Systems RF engineer Gary Trenda. “The Quadversity antenna system increases reliability and range. No matter where your transmitter is, you’re always closer to antennas than you would be with a regular diversity setup. That’s a huge advantage to us because the stage design and location are typically not yet finalised at the time when we are designing the RF distribution and specifying the wireless equipment.”

The halftime show was a Shure-driven event, with Adam Levine’s vocals delivered via an ADX2FD/SM58 microphone. In addition, Levine and Maroon 5 lead guitarist James Valentine used the new ADX1 bodypack systems for their guitars. The ADX series of Axient Digital incorporates Shure’s ShowLink system, which provides full remote control of all transmitter functions by the system operator. This backchannel command and control system was powered by three AD610 ShowLink Access Points, strategically placed around the Mercedes-Benz Stadium.

“Throughout the day, PWS’ Cameron Stuckey was monitoring all the Shure wireless systems with the Wireless Workbench software,” Trenda added. “With Workbench and the AD610 Access Points, we can control all aspects of the ADX series transmitters. We can actually change frequencies, and adjust other functions remotely. This provides an extra measure of reliability and confidence that you need at an event like the Super Bowl.”

During the week, 48 Axient Digital channels were deployed at Super Bowl press conferences by the NFL, the Rams, and the Patriots, plus Opening Night at State Farm Arena and at Super Bowl live fan events. Shure MX418 gooseneck microphones were spotted on podiums for speeches and interviews in the Georgia World Congress Center.

Meanwhile, Shure wireless systems were seen at official events around Atlanta leading up to Super Bowl Sunday, with hundreds of Axient Digital microphones and PSM 1000 in-ear systems in the most demanding situations.

“The Super Bowl requires a lot of preparation and specialised equipment, and Shure is a big part of that,” Trenda concluded. “Once again this year, we had no equipment issues at all during pregame or the halftime show, so it’s fair to say that Axient Digital with Quadversity is our preferred wireless. It’s a proven product that gives us the reliability required for a live broadcast event like the Super Bowl.”