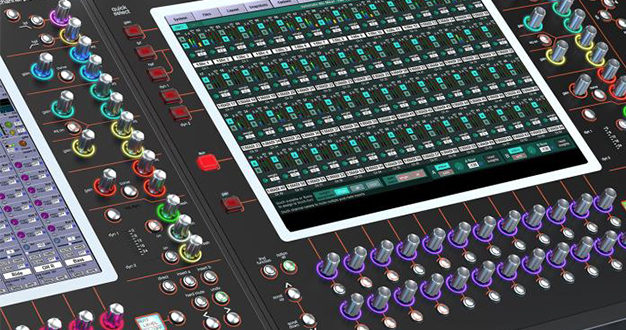 DiGiCo has launched a number of new products at ISE 2019, including the expansion of the DMI-AMM (Automatic Mic Mixing) card onto DMI enabled SD-Range consoles, the A3232 DMI for S-Series and the initial steps of the planned integration of KLANG:Technologies immersive in-ear mixing into the SD-Range.

The DMI-AMM allows up to 64 channels of automatic mic mixing on both DiGiCo’s flagship SD7 Quantum and the SD12 console. Designed in direct response to requests from the corporate market, the DMI-AMM is designed to benefit any production where complex vocal mic setups are in use.

Insertable on any input channel, be it local or rack I/O, the DMI-AMM is designed to assist engineers with multiple spoken voices. It is incorporated into the console’s user interface, allowing a continuous workflow that does not hinder the operation of the console.

In both the SD7 Quantum and SD12 consoles, the DMI-AMM offers 64 channels of processing which can be used in any console input channel. There are two independent AMMs implemented by the DMI-AMM, known as AMM-A and AMM-B, with channels assigned to either A or B or neither.

The A3232 DMI card from the 4REA Range is now incorporated into the S-Series consoles. This I/O expansion allows for the 4REA4 I/O to be directly connected to the S-Series, widening the I/O possibilities. As part of this upgrade a newly launched S21-Stage48 and S31-Stage48 system are being offered with 48 Mic inputs from stage via three 168 Stage racks.

Finally, following the recent acquisition of KLANG:Technologies by DiGiCo, the two companies are showcasing the first stage of their control integration of immersive in-ear mixing at ISE 2019. The bidirectional control of mixes and their immersive pan positioning will allow monitor engineers to provide fully immersive IEM feeds as part of their normal workflow. The complete integration will be shown at Prolight + Sound later this spring.

Visitors to ISE this week can find DiGiCo on Stand 7-K200 from February 5-8.