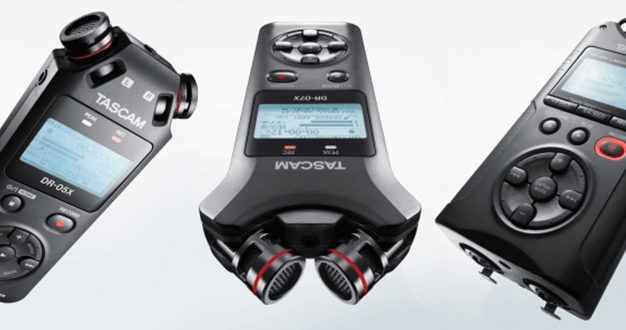 At the 2019 NAMM Show in Anaheim, California this week, Tascam will be showing three new handheld recorders that can also be used as a USB interface, as well as two new USB audio/MIDI interfaces with DSP capabilities.

DR-05X, DR-07X and DR-40X are a range of new handheld audio recorders with revamped, multilingual user interfaces and new functions like tape-style Overwrite recording and a Dictation mode.

By connecting the recorders to a computer or iOS device, they can serve as a high-quality USB audio interface for recording and playback with DAW or streaming software. While the microphones built into the DR-05X are fixed, both other models offer the ability to set their mics in AB or XY position. The DR-40X can create four-track recordings and dual recordings at different levels, while the DR-40X can handle MS microphone configurations with external mics connected to its XLR balanced inputs and decode MS recordings.

All three models support WAV file formats up to 96 kHz/24 bit and can also record and play MP3 files at 32–320 kbit/s bit rates. The DR-40X is compatible with the BWF file format which can hold meta data and is preferred for motion picture, radio and TV production. Other features of the series include: three different auto level modes (Limiter, Peak Reduction, Auto Level) that can help to prevent accidental distortion while recording, a Level Align function that allows to smooth out volume jumps during playback, a built-in speaker for quick check-back, six reverb effects that can be applied to the input or output signal, variable speed audition, low-cut filtering, chromatic tuner and more.

Meanwhile, the compact SERIES 102i audio/MIDI interface with up to ten audio inputs (two mic/line/instrument, eight optical) and two analogue audio outputs is designed for guitarists, songwriters and owners of small studios while the SERIES 208i with its 20 audio inputs (four mic/line/instrument, 16 optical) and eight balanced analogue audio outputs is geared towards professional studio and live recording.

Both models (pictured above) can be used with macOS and Windows computers or iOS devices for recording and playback at up to 192 kHz/24 bit. Controllable with included custom software, these USB interfaces are equipped with a powerful DSP input and output mixer with built-in digital reverb, compressor, phase invert and four-band EQ for each channel.