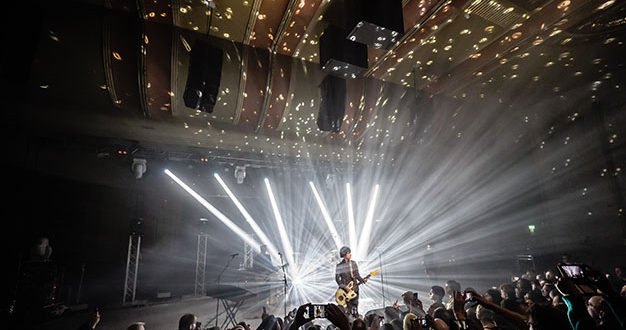 British singer/songwriter and producer Johnny Marr has been on the road with his fourth solo studio album – Call the Comet – bringing his latest UK journey to a close with a sold-out date at EartH (Evolutionary Arts Hackney), London, a venue which marks the first permanent installation of L-Acoustics’ L-ISA Immersive Hyperreal Sound technology in a European live music venue.

The EartH L-ISA Frontal system comprises five hangs of seven Kara and a central sub system of four KS28 flown in end-fire configuration in front and above the central Kara hang. Ten X8 enclosures are positioned along the stage lip for front fill. 12 Syva make up the surround system – four per side – mounted along the left, right, and rear walls, while an overhead system of eight ceiling-mounted X8 completes the installation.

The former founding lead guitarist of The Smiths has forged a successful solo career since his debut album in 2013. For Marr’s FoH engineer, Russ Miller, this was his first date with L-ISA, and said: "I was blown away by it. The separation is unbelievable, without it feeling like it’s separate sources. At sound check our backline techs were amazed: we had people just walking around the venue listening; it sounded the same from front to back and from side to side.”

Miller decided to adopt a more object-based mix for the show: "We’ve got the two-channel show to a point where, input-wise and processing-wise, I have the kick, snare, bass, and lead vocals in the centre of the mix with effects specifically to give the lead vocal more width. I then push the guitars and ‘keyboard’ elements out to the side and use delays within the Haas region to clear space for the central elements. This creates a stereo illusion and gives mono compatibility even when the speaker stacks are a long way apart, you get pseudo stereo without the old ‘disappearing guitar’ problem when a listener is right in front of one side. But switching to L-ISA and not having to jump through hoops to get the separation was amazing. With L-ISA, if you put the vocal in the centre, it’s in the centre and not a phantom centre.”

The Call the Comet tour uses DiGiCo SD11 consoles, sharing SD Rack I/O. In this instance, Miller’s FoH SD11 was connected to EartH’s in-house DiGiCo SD12, allowing him to get creative with L-ISA. DiGiCo consoles now have natively integrated L-ISA Source Control functionality, so Miller was able to pan from the console, while Melchior provided support on the L-ISA Controller software.

Miller also decided to make use of L-ISA’s 3D processing for a psychedelic moment in the Marr set. "Johnny has a song on the new album called “New Dominions”. It has a break-down section in the middle that comes down to just bass and drums, and then Johnny comes in and there are delay throws where I change the delay time so that it creates a pitch change,” he said. “It’s an old trick, but it works for this."

At EartH, Miller took the stereo delay output and sent it to the house console where they could ‘play’ the L-ISA Pan, Width, Depth, and Elevation parameters. "I said let’s go crazy and throw it around – send it over people, to the back, all around," Miller added. "Johnny always said it should be trippy and psychedelic. It worked incredibly well.

"After only about four minutes of putting stuff through the PA I realised that this system is a solution to a very old problem,” Miller concluded. “It’s a big move into bringing down sound levels so you’re not smashing people in the face, but you’re still producing something that excites and intoxicates the audience. This technology is amazing, it’s not going away, and it can only become more popular."