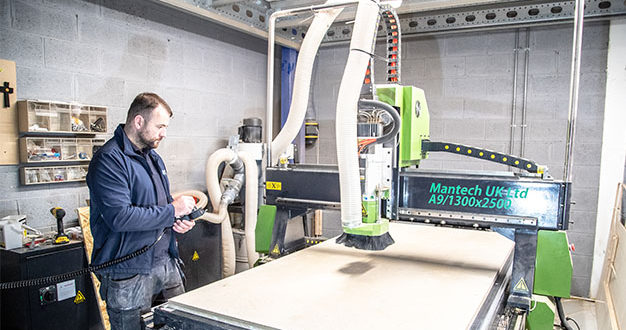 In many areas of audio post production, confirmation on commissions are being delayed and the amount of time professionals have to do their post production work is being reduced. It’s clear to see that the industry is becoming pressurised, and while these trends look unlikely to be reversed anytime soon, companies need to come up with new methods of constructing and equipping studios that take into account these shorter deadlines.

Enter Smart Studio, a fusion of acoustic design and active acoustic technology with modern building techniques and materials. An extensive review by the Dublin-based team is what led directly to the development of this flexible and radical strategy, which includes all of the key elements necessary in a professional studio environment.

The solution has primarily been developed in response to the growing level of dissatisfaction with traditional methods of designing and building critical studio facilities, as Jim Dunne, senior acoustic consultant and the creator of Smart Studio, explains: “The concept comes from being very frustrated with the standard of your builder in terms of being able to convert your ideas or plans for a studio into a real world entity.

“Being based in Ireland with two huge marketplaces to our either side meant there had to be a modular element to it. We had to come up with something different, to replicate a fully professional studio but broken down into this modular format.”

A lot of advantages immediately became apparent to Dunne and co: “It’s made in a factory so it’s repeatable in terms of quality,” says Dunne. “It provides huge efficiencies because we’re able to make and quality control all the components in our own backyard and produce a lot less waste.”

The modular design of Smart Studio allows the opportunity for it to be demounted, meaning users get a residual amount of their investment back when they relocate to another site. This also means there’s no cost of dilapidations and from an environmental perspective, the facility does not need to be ripped out and completely rebuilt elsewhere.

Dunne’s career in the audio industry was pre-dated by a spell in construction working with his father. He ended up moving away from the building industry and going to college to do electronic engineering, eventually ending up working in a recording studio in Dublin. Having moved on, he had his own company supplying recording and broadcasting equipment to the local Irish marketplace. Garnering a broad range of knowledge from being in such environments while also developing an understanding of the equipment and installation side, Dunne then became familiar with acoustics through his conventional acoustics consultancy iAcoustics.

“Luckily, we haven’t had to actively collaborate with anyone else beyond the envelope of the company, because we share such a wide range of skills between us and can do all the manufacturing ourselves,” Dunne explains. “It’s in our nature to be somewhat more self-reliant. Smart Studio is kind of a reflection of who I am as an individual, and the experiences I’ve had in my working career as such.”

Dunne goes on to explain that the target market for Smart Studio is very much the people who work in sound for film/TV and sound for corporate purposes. The concept seems to suit post-pro professionals very well, perhaps because of the unfortunate state of the music industry, with funding hard to come by for small music producers.

While there’s still a proliferation of home studios, and there’s been a clear evolution on the electronic side, the fundamentals still exist in that audio professionals will always need an accurate monitoring environment. Dunne goes on to say that while the availability of audio DSP technology has enhanced the overall situation, and as much as a bedroom is a working environment, it is not an accurate listening environment.

Those interested in the concept can log their details on the Smart Studio website and use the online cost estimator to get a budgetary figure for their studio build. “As we see it, there’s a number of different agendas and people who would be involved in the decision-making chain; some of them will look at it from a business perspective, some from an acoustic perspective, and some from an environmental perspective,” Dunne adds. “We hope that Smart Studio will become one of these aspirational things that people might not be initially be able to afford, but will commit to it in the future.

“From an acoustic point of view, we really pride ourselves on the quality of the room acoustic environment that we create. The design is very robust in the sense that we really do address both the sound insulation requirement and the low frequency bass absorption requirement for a studio. I would suggest that virtually all of our rooms would be suitable for Dolby based applications and what we already know – having analysed the rooms that we’ve built so far for the likes of Manchester-based Flix – is that we can really achieve excellent levels of low frequency acoustic control.

“We also use a huge amount of diffusion in our rooms, albeit very carefully. It’s not quadratic diffusion but 2D diffusion, which means that you retain the acoustic energy in the space but its diffusely spread in the room. With this type of diffusion we end up with a very comfortable acoustic environment which people can work in for an extended period of time, and this is consistent from room to room. Our objective is not to make a room that has a sound, but to make a room that lets you hear the speakers which you’ve spent time, effort and energy researching and buying.”