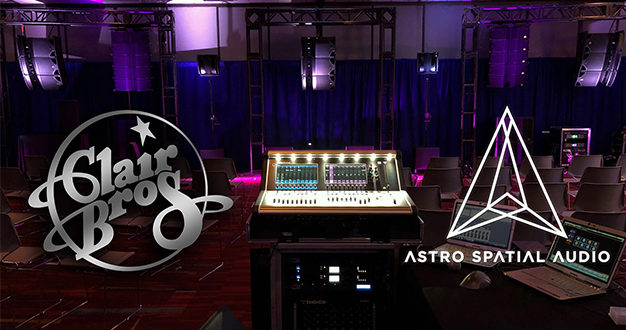 Astro Spatial Audio and Clair Brothers will partner at the 2019 NAMM Show from January 24-27 to present a series of immersive 3D audio demos.

Taking place twice daily on booth 17200, the showcases will mark the NAMM Show debut of both companies.

A single 3U Astro Spatial Audio SARA II Premium Rendering Engine will sit at the heart of the system. Offering up to 128 MADI or 128 Dante configurable network pathways at 48kHz/24-bit resolution, the SARA II converts audio signals into audio objects and uses extensive metadata to precisely calculate that object’s position within virtual 3D space up to 40 times per second, as well as that object’s acoustic effect on the virtual space around it.

“We are delighted to announce this cooperation with one of our industry’s most recognisable and respected brands,” commented Astro Spatial Audio managing director, Bjorn Van Munster. “We have always believed that sound designers and engineers should be free to choose the system they want to use. I’m delighted that for our first appearance at The NAMM Show, we’ll be able to demonstrate that versatility once again alongside such an important partner.”

Clair Brothers VP and chief engineer, Josh Sadd added, “Over the years, we’ve been involved in many projects that would now fall under the ‘immersive’ label. To say that there’s one ‘right’ way to approach this is impossible due to the extreme environmental constraints and variables that come up in practicality. That’s where we see the value in Astro Spatial Audio as our preferred immersive solution – it’s simply the most flexible, intuitive and fastest to deploy in a variety of ways. Your limit is your imagination!”