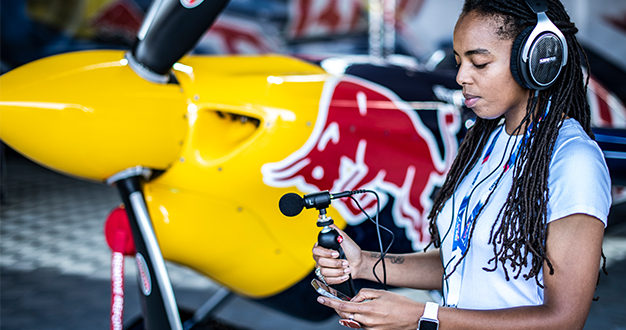 Shure teams up with Red Bull on ‘Soundscapes’ audio experiment

Shure and Red Bull have announced a global partnership aimed at reengineering audio recorded at live events into an immersive musical experience.

Shure worked alongside Red Bull during the latter half of 2018 to arm three up-and-coming producers with the newly launched MV88+ Video Kit to capture the sounds from three of Red Bull’s most eye-catching sporting events.

The result is “Soundscapes,” a collection of produced audio recordings that aim to provide a highly immersive experience and can be accessed here.

The MV88+ Video Kit, the latest addition to Shure’s MOTIV line of digital microphones and portable recording solutions, was used by each producer to record professional quality content on-the-go at the three Red Bull events.

NTS Radio regular Anz kicked things off at the Red Bull Hardline in Wales, capturing the sounds of one of the toughest mountain bike races in the world. Up next was Red Bull’s popular Air Race in the US, which brings together the world’s best racing pilots, while in Japan, Coconut Beats head HAAi recorded audio from the fastest sport on skates—Red Bull Crashed Ice.

You can find more information on Shure and Red Bull’s partnership and listen to the three music tracks created with Shure’s MV88+ Video Kit here. www.redbull.com/soundscapes