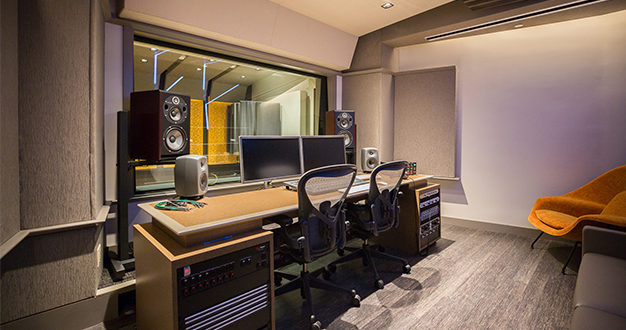 There may often be a common misconception about podcasting, and while some might be quick to assume that they are made in a kitchen with some kind of rudimentary setup, there are in fact a number of big companies putting in a lot of time, dedication and money in order to research, create and distribute their high quality content.

With New York and LA playing host to some of the largest dedicated podcast studios, competition between and within these two hubs is fierce, and podcasting as a medium remains as popular as ever. WSDG Walter-Storyk Design Group recently took on the task of designing and building some of these facilities, each with their own specific requirements and individual challenges.

One of these was Gimlet Media in New York, where many of these bespoke podcast studios are coming to life. Gimlet itself was a company that – in around a year and a half – expanded extremely rapidly and outgrew their original studio space. They went from a very small facility to a 20,000 sq ft. floor in Brooklyn, dedicating 2,700 sq ft. of this to studio space, as WSDG partner and director of production Romina Larregina explains.

“We hit it off straight away; they were very smart and extremely engaged with every process of the project,” says Larregina. “There was a lot of collaboration and a lot of listening and communicating. Fitting the entire programme into their footprint and making it work was extremely challenging."

The company required 12 podcast studios in total plus a recording studio, each with their own specific requirements. The podcast rooms had to allow enough space for participants to have that essential face-to-face interaction, while there was a lot of discussion and layout changes based on the amount of space needed in each room. “We went to town with them to work out exactly how we would custom build each of these rooms and fit them into the designated footprint,” Larregina adds. “What was more challenging was that even though each room was a different size for a specific amount of people, they all had to behave acoustically exactly the same, and the reverberation time in each of them had to be identical.

“A half hour podcast is often edited in five to seven of these rooms over the course of a week, so the rooms have to sound the same when it comes to mixing it all together. This was also challenging in terms of determining exactly what acoustic treatment we put in the rooms and the amount, while also trying to stay within a reasonable budget.”

The technology requirements at Gimlet Media were also rather reasonable; a collection of high quality mics and a Dante audio networking system to manage and secure all of their recording equipment and data.

The podcast studios themselves are three quarters fully isolated, with a double wall construction design and an acoustic lid on the ceiling, but no floating floor. With an effective carpeting system instead, WSDG was able to mitigate the sound leakage between each small podcast studio. The recording studios had to be fully floated and isolated however because the team wanted to avoid podcast recordings being interrupted by music sessions.

“A common theme with many of these big companies making studios in New York is that they create their own music for their content, which is financially very efficient for them because they’re not having to pay royalties for songs,” Larregina observes. “Which is why there is a demand for these recording studios – there’s so much work and thought that goes into researching and creating this content.”

Another facility which WSDG helped build is Midroll Media, which recently merged with podcast listening service Stitcher. Here, many of their rooms are used for podcast recording as well as a lot of editing duties, so they needed to have the exact same setup as a recording studio, as well as being acoustically identical. This particular facility also required a live room, control room and an isolation booth.

“While working on the New York facility, which we built from the ground up, we were contacted by their LA facility – which was already built and finished – to fix the current sound isolation and interior room acoustics in their rooms on the West Coast,” says Larregina. “What was interesting here was that, as we were also involved in the audio-video systems design, there was a lot of conversation with the engineers from both facilities to make sure all of their workflows and equipment were aligned and compatible.”

Perhaps the most familiar name to rely on WSDG for their podcast studio build however is Audible, the original audio book company which was acquired by Amazon in 2008. “We built a small facility for them across one floor in 2007 but after the buyout, they expanded to the other floors of their building in Newark and called us back,” Larregina reveals. “We were able to re-use the studios that we built for them before because they were prefabricated booths.

“Their requirement was also to try and maintain the same setup as previous, albeit with slightly larger control rooms and iso-booth studios. They also required a green room and lounge area for when famous faces come to the studios to do audio book readings in the celebrity booth!”

All of these rooms are 100% fully isolated with very low ceiling heights, which proved extremely complex for the design and build teams. “As well as isolating all the walls, floors, and ceilings, we had to bear in mind all the requirements in terms of the conduits and how they run, HVAC placement etc. – They all have implications for the way these rooms are designed,” adds Larregina. “There was a lot of intricate designs on this side to make sure there were no stray connections between the rooms when they were fully isolated. They had to make this happen quickly though as demand was very high, and we were there every week checking the site during the construction phase.

“After all the hard work, it’s great when you do all the acoustic testing and measure the noise criteria and every room meets the spec. It’s very pleasing indeed,” Larregina concludes. “All of these projects met the client’s and our expectations in terms of isolation and how the rooms really function. There’s a lot of companies wanting to make these kind of rooms now which is really cool.”