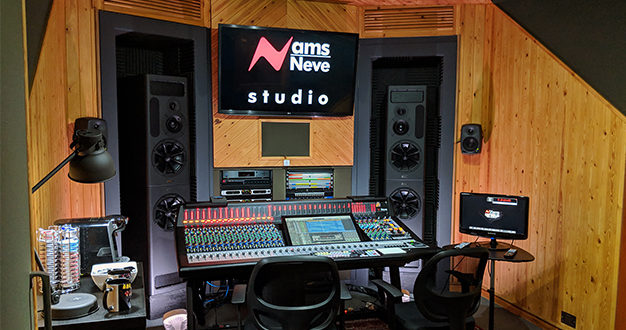 Console manufacturer AMS Neve has transformed a demo room at its Lancashire HQ into a fully fledged recording studio complete with a 3.5 meter square control room, live room, vocal booth, and PMC MB3 XBDA monitors, which were chosen for their clarity, detail and power.

AMS Neve’s new studio was originally installed in the mid-1980s as a place where the Audiofile digital audio editor could be demonstrated. Since then the space has used for many purposes but never as a fully working studio.

“The primary purpose of this new facility is to demonstrate our consoles and their features at any level of detail, within a top-tier studio environment,” said AMS Neve’s distribution manager David Walton. “We needed monitors that made a statement to go along with the AMS Neve equipment in the room. We have several sets of PMC monitors installed in our large showroom (and have used them during many exhibitions and demonstrations) and we are very happy with them, but the visual statement the MB3 XBD’s make in the studio is one of sheer power. Then you listen to them and you realise just how fantastic they sound with jaw-dropping performance.

“A few years ago we opened our large showroom floor to showcase our products and at that point it became clear that we also needed an environment where equipment could be used as intended,” Walton added. “We decided to refurbish the studio from the ground up, creating a control room that is acoustically designed to be ‘flat’ so any particular sound is presented as intended without additional influence – the entire frequency range ‘pops’ right at you in there."

Alongside the PMC monitors, the studio is equipped with a fully-loaded Neve Genesys Black G32 console and there is scope to bring in a Neve BCM10/2 Mk2 console if customers want to demo it in a fully working studio environment. There are also several AMS Neve 500-series modules and a 33609N stereo limiter/compressor, plus any number of Neve outboard units can be installed and patched into the console as needed. A full range of analogue and digital I/O is also available and the room is fully networked.

AMS Neve has several sets of PMC IB1S monitors, several pairs of TwoTwo8s, Wafers in the ceiling of its Dolby Atmos demonstration area and a pair of Twenty:26 floor-standing monitors in its presentation area, but it is the MB3 XBDA system that really makes David Walton happy.

"The sound is amazingly detailed and ‘solid’,” he said. “They allow you to zoom in on a particular frequency or instrument and really hear it. One look at them shows just what they are capable of physically – in terms of moving air quickly – but the sonic clarity they deliver at any level is simply excellent. We’re not planning on using it as a commercial venture but it is so highly specified you never know. The room looks and sounds absolutely incredible."