Home / Feature / Into the Wild: Creating an immersive audio mix for Shadow of the Tomb Raider 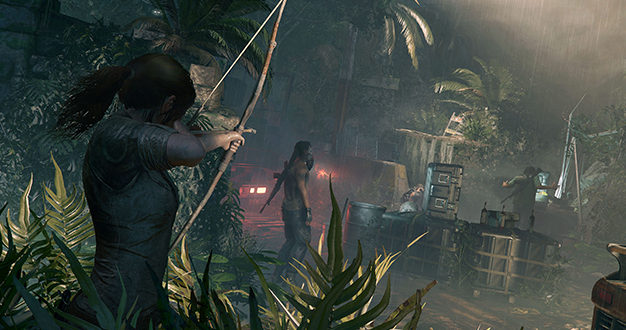 Into the Wild: Creating an immersive audio mix for Shadow of the Tomb Raider

How do you come up with the most visceral, emotional and intense Tomb Raider experience to date? Well, it took a dedicated instrument hunting trip to Mexico and a deeper learning of Mayan and Aztec culture for lead composer Brian D’Oliveira to fully realise what was required when recording the score and sound effects for Shadow of the Tomb Raider, which hit shelves back in September 2018.

On the creative side, it took a total of three years to turn a lot of heavy R&D into hundreds and hundreds of minutes of music for the game. During his own South American adventure, D’Oliveira filled up eight bags with curious prehispanic instruments including the death whistle, so a lot of what is heard in-game are authentic sounds plucked straight from the Amazonian jungle.

The technical side of this extensive project was equally as intriguing however, and this is where Jera Cravo, technical director and lead audio engineer at Montreal-based La Hacienda Creative, comes in. Cravo was mostly responsible for mixing and recording the music, and his team was contacted by the game’s audio director Rob Bridgett to discuss how they could deliver a truly immersive audio mix.

Despite being a three-year project, sometimes deadlines for specific pieces of music were very tight, and therefore the teams had to streamline their workflows as much as possible. “Time was usually the main concern because of the scale of the project and because most video games change a lot though their development,” says Cravo. “When there is such a high track count you need to have your workflow totally figured out. Usually, Brian and an engineer will record in the live room on a workstation, and I will be in the control room mixing the previous song he just finished. By the time I’ve mixed the previous track, he’s got another one ready for me. It’s the best way to deliver high-quality stuff quickly, and this way we were able to deliver almost the same amount of music we had two and a half years to work on, in about five months.

“We initially recorded at 96kHz-24bit so we kept working at that resolution but of course, files would get compressed afterwards right before they get “burned” into the game build,” Cravo adds. The audio and music is then implemented into the game using a software called Wwise – developed by another Canadian company called Audiokinetic – which serves as the link between the game engine that creates all the graphics, mechanics, AI, etc. and the sound teams.

In their efforts, Cravo and co experimented with a lot of different mic techniques and equipment: “We used a B Format microphone made by an American company called Josephson,” he says. “The C700S has three capsules in it, including an omni capsule, and lets you record sound in 360 degrees, so Brian was always moving around the mic to place instruments in different positions of the stereo field during the tracking session.”

A lot of times this positioning wasn’t “sharp” enough, so Cravo could focus that specific placement even more, or change it completely if he felt it didn’t blend well with the other instruments in the mix. “Because we were tracking at 96kHz-24bit and each of those tracks contained three audio streams (a B Format file is just like a stereo interleaved file but with three audio streams instead of two), sessions got insanely heavy – some containing over 200 audio tracks, which meant 600 streams of 96kHz-24bit audio,” he explains. “When this technique started slowing us down too much, we decided to just use the C700S in M/S mode (recording just the omni and the 90 degrees figure 8 capsules) to try to save a bit in disk space and CPU processing (since we didn’t need to use the B Format decoding plug-in anymore).”

Cravo’s main recording rig (pictured right) was an AMS Neve 1073 into a Burl Bomber B2 A-D converter (AES or SPDIF) into a Metric Halo ULN-2. At a certain point however, the team needed to speed up the process, without of course compromising on sound quality.

“Since we owned a few Universal Audio Apollo interfaces (first gen Silver Faces, Black Faces, Twins and Twins MkII) with Unison preamps for a long time, we decided to put their Unison emulations to the test and to be honest, we couldn’t hear the difference between our Neve preamps through the Burl converter and the Neve Unisons through the Apollo converters on a 100+ tracks piece of music,” Cravo explains. “Maybe we would be able to if we did more scientific tests, with same sources, recorded at the same time with matched microphones, but in the real world, they sounded at least as good as the more expensive signal chain.”

Once the team decided to go with the Apollo setup, they had the Apollo console running two stereo inputs at all times. One input always had the Josephson C700S in M/S mode into a Neve 1073 Unison, while the second input was an U87 together with a Gefell UM930 in M/S using a different Unison preamp. “Lots of tracks used the UA610 or the Manley VoxBox or the Helios 69,” says Cravo. “The input chain choice was made in real time, playing through both sets of mics and choosing the one that fits the track.

“Brian and myself are longtime UAD users, and because their software and hardware is both bulletproof and sounds amazing, we could rely on it to deliver the best possible quality in the shortest amount of time, every time, without cutting corners.”

D’Oliveira also chose to record with a 3Dio omni-binaural microphone which contains four sets of binaural mics. By twisting and turning this microphone when close to the source, some “wild” panning effects were achieved without any need for audio post or automation during the mixing process. To do this immersive aspect of the game justice, it was mixed in Dolby Atmos at Pinewood Studios in London by Bridgett and lead sound designer Fred Arnaud.

“Certain parts of the game – especially some of the puzzles – had musical elements panned around the environment, coming from above the player, basically as a 360 degree mix,” explains Cravo. “And of course, they had ambiences and sound effects exploring all the possibilities that Atmos gives us, which was super cool to hear.”

With the gaming industry moving more money than Hollywood these days and their epic musical scores arguably one of the few things keeping orchestral music alive, video games as a medium are definitely not going anywhere. Cravo concludes: “It provides fantastic immersive experiences and now with the whole VR side, it’s great for us audio guys and girls because we can go crazier and experiment even more.”