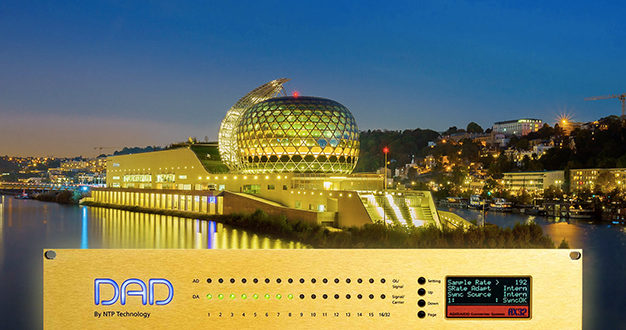 “The implementation of a Dante Network was decided upon as soon as the building was conceptualised in full. All studios, rooms and concert halls needed to be linked through Ethernet,” said Arnaud Kalmes, head engineer at the Riffx Studios in the La seine Musicale building. “The Dante protocol simply seemed to be the ideal solution, as it would allow us to record in any room or concert hall in the building via a single Ethernet cable.”

To support this networked infrastructure, two rolling racks were put together, each holding a DAD AX32 and XLR connector panels, virtually making each rack a portable stagebox with high-quality mic preamps and A/D conversion, as well as the link to the Dante network. These racks can easily be moved to any room or hall in which a recording session is scheduled. Regardless of location, these racks connect to a network port in the wall and all of the channels are routed to the control room in which another AX32 unit gathers the audio streams and interfaces to the DAW.

“We have four studios where we record daily, but we can also record in other studios and concert halls of La Seine Musicale,” Kalmes explained. “Every space is linked to the network which lets us record in our control room from any location. We use several stage racks containing the AX32 on a daily basis. We simply roll the unit in the studio and patch it up to the wall.

“We also use the DADman application to create presets for different recording sessions. This allows us to do very quick recalls between sessions and also save new settings that can be recalled at any time. That way, the sound engineers, who come in to work here, can save their own settings, leave for a year and find their entire setup when they come back. In short, all of our studios gravitate around the DAD AX32’s. The routing options are unbelievable and the preamps and converters are excellent and the solution is as future-proof as it is flexible.”