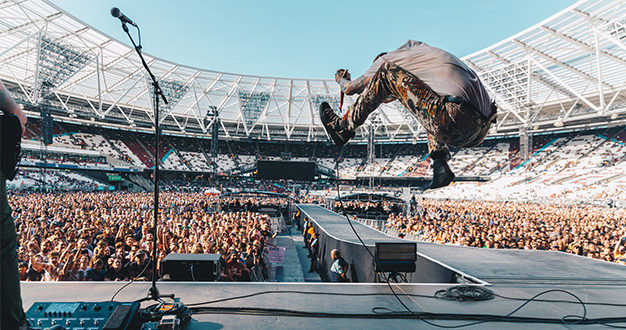 Shure has been supporting Frank Carter over this summer’s festival season with its Axient Digital Wireless Systems.

Frank Carter and the Rattlesnakes are an English punk rock band which formed in 2015. A long-term Shure user, Frank Carter has a whole collection of Shure microphones on all aspects of his setup, from the classic Beta91a and Beta52 combo on the kick drum to a SM57 on guitars and an SM58 on vocals.

The move to Axient Digital was a natural progression for the band, having known about Axient Digital for a while; live sound engineer Mike Woodhouse had never worked with an artist that needed an upgraded wireless system.

“Nearly two years ago we switched both guitars and bass to Shure GLX-D wireless units, allowing Dean, the band’s guitarist, and Tank (the band’s bassist), to have maximum movement on stage at all times. These units proved perfect for the band’s needs, however the band’s fanbase is growing quickly, and so have the stages,” Woodhouse explained. “To ensure we didn’t lose any form of signal quality on the larger festival and high-profile support slots, the new Axient digital units became very appealing to us and in turn we had to try them out over this summer’s festival season.”

Frank Carter and his band are known for getting up close and personal with their fans and joining them in the crowds. Woodhouse needed a system which was reliable and was not at risk of signal degradation: “We’ve had the guitar over 200 meters away from the stage in the London Stadium, without losing connection,” he added. “That blew me away, I’d never seen anything like that before. The sound quality is like what you’d expect from a cable connection. Full of depth and clear as day from the PA.”