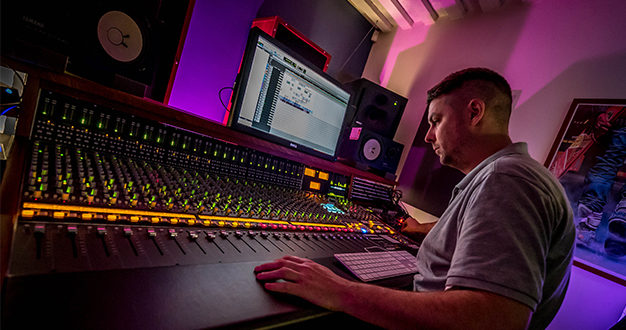 UK mix engineer Dean James Barratt has added a Solid State Logic (SSL) AWS 924 SuperAnalogue hybrid console to his setup at The Dairy Studios in Brixton, London where he is currently working from.

"What you want in the analogue world is as much colour and as much depth as possible,” said Barratt. “The desk gives plenty of that, but its routing adds a lot too. At a basic level the AWS is a 24-channel summing box with great EQs on every channel, but things like the EFX function makes the difference with the parallel outboard compression." The AWS EFX System makes use of any unused aux sends to control the level of feeds to the track busses or direct outputs.

Barratt most often uses eight stereo pairs from his Pro Tools rig, leaving another four for analogue returns: "I use the group outputs from the desk to feed four different outboard compressors, " he explained. "Those are returned to the other eight input channels on the desk for lots of parallel compression options. That way I can EQ the compressor returns in the desk and feed them into the mix in different ways.”

A recent development in Barratt’s workflow is to use the AWS 924’s independent Mix and Rec busses to bring some additional overall balance control. The bass and drums are routed to the Rec Bus, while everything else goes to the Mix Bus, and those are then summed. "I’m always very careful about the bottom end of the mix and the ‘pressure’ of the drums being right," he notes. "Having those on their own fader, to then feed into the intimacy of the music and effects gives me a lot more control. That’s something I started playing around with very recently."

Barratt’s basic set-up uses a patchbay with 24 Pro Tools outputs normalled to the 24 inputs on the AWS, and the direct outputs returned to the DAW. The main stereo bus from the AWS is also returned to the DAW, and there is another set of DAW outputs connected to the console’s monitor inputs. Those are used for reference channels such as demo mixes, benchmark tracks, in-the-box dynamics checks, and so on.

"I even prefer the sound to ‘classic’ older consoles,” Barratt concluded. “When I spread all the stems out on the AWS the tracks still sound fat and warm – when I do that on older consoles I have to work the warmth back into it."