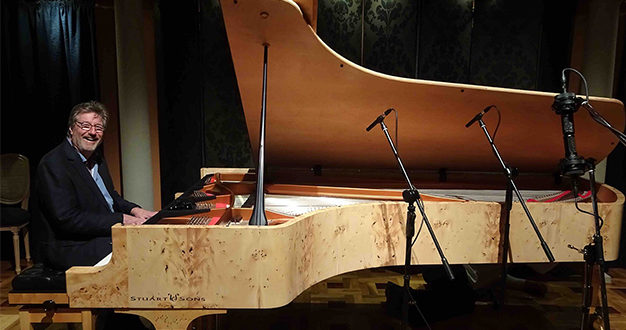 The performance was closely followed by a rendition of Gigue Sonata in A minor, a unique piece by Bach which has never been performed in public on a piano and all of these events were brought together on The Beleura, the world’s first 9-octave, 108 key grand piano, built by Stuart & Sons in Tumut, NSW.

The recording took place at a concert held at the historic Beleura House, a venue that was fittingly and formally owned by composer John Tallis. In 2014 house curator Antony Knight commissioned a 102 note Stuart & Sons piano to be installed in the house’s new pavilion. Four years later The Beleura, named after the house itself, was delivered and commissioned.

It was Wayne Stuart, proprietor and head designer of the 108 note piano, who explained that The Beleura could only be recorded in the Hi Res format due to the incredibly high frequencies developed by the soundscape of the instrument which weighed in at 644kgs and boasted 218 strings spanning the 108 notes.

Sony Australia product manager David Green explained, “For the last 30 years we have come to expect CD quality as the premium. However, with the introduction of Hi Res playback devices, speakers and headphones, for the first time in the history of music recording the microphone is actually the weak link with most commercial microphones rolling off at 20Khz whilst the Sony Hi Res mics will recognise and pick up Ultra High frequencies up to 50Kz.”

It was the responsibility of industry expert Craig Field from Underwood Studios to record the performance with the Sony Hi Res Series microphones in Hi Resolution audio, enabling the entire frequency spectrum of The Beleura to be faithfully reproduced.

Sony Australia product manager David Green explained, “Most concert grand pianos have 88 keys but this is the first known piano ever to be built with an amazing 108 keys. This means it boasts a gigantic nine octave range which was unheard of on the piano until now. Due to the incredible range and the immense cacophony of harmonics and high frequency overtones it takes a unique kind of microphone to fully record its range and beauty – which is where the Sony High Res 100 Series mics came in.

“The Beleura House concert was an unparalleled success,” Green concluded. “By using Sony High Res Series mics the holistic sound of The Beleura piano was beautifully and accurately reproduced including all of the ultra hi frequencies that are normally lost with a CD quality recording. Listeners to the recording of the concert are now able to appreciate the incredible sound of this amazing instrument exactly how the musician heard it at the time of the performance.”

Hear Sony’s 100 Series High-Resolution microphone and the world’s first 108-key piano create the first-ever High-Resolution recording of the Sonata in A minor, BWV 965: VII. Gigue, exactly as Bach wrote it, below: