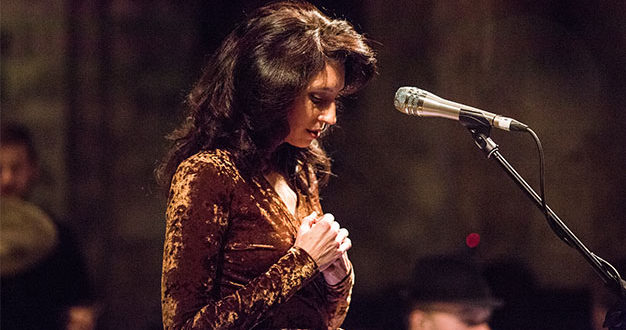 Shure recently helped singer-songwriter Hazel Iris celebrate the release of her first full-length album, Nine Sisters, at one of London’s most historic landmarks.

The event, held on October 25 at St. Bartholomew-the-Great at Smithfield, was more an arts festival than an ordinary launch gig, with a number of innovative artists from various genres on the line up.

“For the Hazel Iris ‘Nine Sisters’ album launch, we used Shure microphones on every instrument. Not only was the live-sound superb but the recording also came out really well,” said Peter Junge, engineer in charge of recording and filming the event. “Listening back I was very surprised by how focused it all sounds and how little issue with bleed or ambience we have on the signals.

“Very often, when using that many condenser microphones in a church, there can be a problem. However, the sound is nicely separated and I’m pleased I’ll be able to make a studio quality mix from it. My favourite microphones on the evening were the KSM8 on lead vocals which provided a super clear sound, the Beta 181 on drum overheads captured the entire drum kit nicely and the Beta 98s on snare and tom which got all the details I want for this kind of music. They all sound fantastic!”

Marc Henshall, senior marketing specialist, pro audio, added: “Shure have a proud history of supporting great music over many decades, and when Hazel approached us with the ambitious concept for her next album launch, it was clear this was an event we wanted to support.

“Far from a standard album launch, Hazel has worked hard to bring in broader creative aspects, including theatrical elements. We’re a huge advocate of theatre at Shure, and we recognise the importance of this sector in what it brings to the UK creative industries, both culturally and fiscally. Hazel’s work in bringing popular music closer to theatre and classical music is refreshing and exciting.”