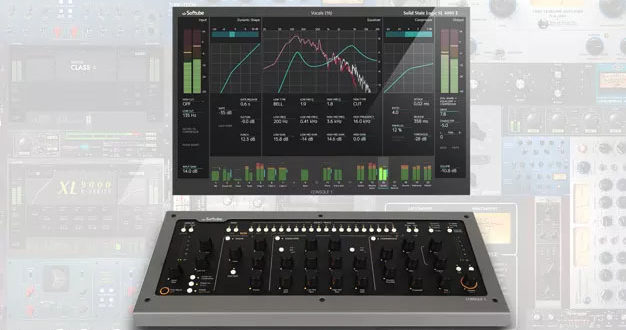 The brilliant thing about software plugins is that they offer a great range of functions and, usually, an awful lot of parameters to play with. For those of us who miss the tactile approach to recording and mixing, this poses somewhat of a problem. There have been many valiant attempts in the past to create physical hardware that can be easily mapped to the parameters of plugins, but they nearly always require some kind of ‘paging’ facility or require you to have to use the mouse for various functions.

One of the companies trying to tackle this conundrum is Softube with their Console 1 hardware controller. Now at the MKII version, it’s a smallish device that’s slightly bigger than a computer keyboard, with a plethora of knobs and switches covering its nice clear front panel. It appears to be well made and feels weighty, so it won’t get pulled off your desk if you happen to catch the supplied USB cable, which also powers the unit. Installation is easy—just plug in the hardware, install the software and off you go.

The Console 1 surface itself is divided into sections, featuring controls for input gain with LED level meters, track selection, phase, preset/plug-in loading and other housekeeping duties, alongside a metered output section with Solo and Mute buttons that double as OK and Cancel for the selection of plugins and presets. At either end of Console 1 lie the high and low cut filter and drive and ‘character’ rotaries, while the centre of the panel features the physical controls for adjusting plugins themselves—called Shape (a gate/transient shaper), Equalizer (EQ) and Compressor. These can be placed in any order in the signal chain and all knobs and buttons are mapped to parameters on Softube’s own plugins. The Compressor section also features a sidechain.

An emulation of the Solid State Logic SL 4000 E channel strip, consisting of the E242 equalizer, the SSL channel compressor, a gate/expander and high and low cut filters, is supplied with the Console 1. Softube offers further channel strips at extra cost, namely, the American Class A, British Class A, SSL’s XL 9000 K-Series and the Summit Audio Grand Channel. The included Apollo central feature can be used to control Universal Audio’s range of Apollo interfaces and several of that company’s UAD plugins can also be instanced and controlled by the Console 1, but you need to own a UAD DSP system to use these.

After installation, the onscreen display page appears on the computer, toggled on and off by pressing the Display button on the Console 1. Here you can load your channel strips or the Shape, Equalizer and Compressor plugins separately—it’s easy to produce bespoke processing paths and save these as presets and you can copy parameters between instances of the plugin between tracks. To use the plugins in your DAW, a Console plugin is instanced on the tracks as required and acts as a kind of conduit to the Console 1 itself. The DAW plugin can be used without the hardware, as all processing is done on the computer—the Console 1 does not contain any DSP itself.

The onscreen display shows the parameters for your tracks selected in the DAW or from buttons on the Console 1 and the name of the track will appear on the onscreen display. Not all DAWS support these features, so it’s worth checking on Softube’s website for compatibility. Turning a knob, or pressing a button on the Console 1 itself is reflected in the onscreen display, as are the meters for DAW tracks and input and output levels. The display is clear and crisp even on my ancient Mac Pro and the visual representations of the compressor, shape and a waveform meter in the EQ section make it, and the hardware, a very nice combination. Because the plugins are developed by Softube, the knobs and buttons match up with their software counterparts. There’s no paging for parameters or shift-pressing to access hidden features—it’s pretty much a ‘what you see is what you get’ paradigm. What this means in practice is that using the Console 1 feels very much like using hardware-based processors—as long as you’re using the Softube plugins. Loading in some of the compatible UAD ones wasn’t quite as seamless in operation, as not all parameters map onto the controls and the frequency meter you get when using Softube’s plugins is not reproduced—but the ability to create hybrid channel strips that combine Softube and UAD plugins is very useful.

The DAW Console plugin itself also features a visual representation of the Console 1, but its graphical interface isn’t as useful as that on the onscreen display and you also lose the visual representation of EQ curves and compressor/gate thresholds. I found that pressing the Console 1’s display button to bring the onscreen display into the focus was a better way of working, until I realised after a long session I wasn’t using any display at all. Muscle memory had kicked in and I was adjusting EQ and compressor settings by ear. It felt a very comfortable way to work and I think Softube have got the tactile nature of the system just right.

To make the Console 1 part of your regular workflow however, you are really going to have to like Softube’s own emulations. I compared the supplied SSL 4000 channel strip to the UAD and Waves versions and all three were slightly different, albeit with the same sonic ‘flavour’. If I wanted to emulate the sound of SSL’s classic console on a mix, I’d be quite happy using Softube’s plugin. The company kindly supplied their other channel strips for evaluation and I can report that these are of the same quality as the included channel strip and provide a range of different tonal colours that can be mixed and matched. Sadly, I didn’t have a SSL 4000 series console in the studio, but I did do some mixes using SSL’s X-rack hardware channel EQ and dynamics modules. Predictably perhaps, the hardware still has the sonic edge over the software for me—but of course you only get one of each to use per mix, unless you are very lucky!

The Console 1 MK II reminds me very much of my much-missed Focusrite Liquid mix systems, which also offered a limited series of software emulations alongside dedicated knobbage. Softube’s offering takes this idea and expands upon it, making a decent stab at creating a workable, tactile control surface. I hope the company pursue further DAW integration and partnerships with other plugin developers as well as releasing more of their own channel strip emulations.