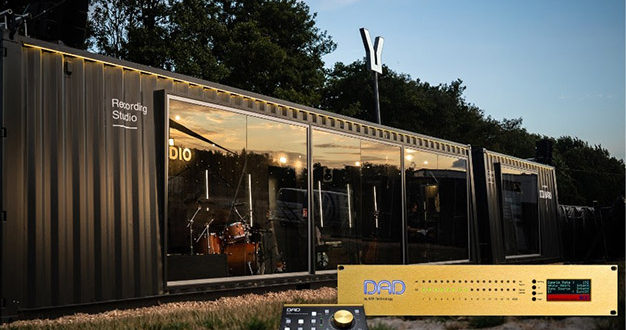 DAD teams up with Dynaudio on mobile recording studio

Digital Audio Denmark has teamed up with Dynaudio to turn two cargo containers into a professional recording studio for musicians.

For the project – dubbed Dynaudio Unheard – a networked IP Audio solution was preferred.

A DAD AX32 unit acts as the primary centrepiece that connects and redistributes all of the audio channels that go between a Nuendo-based DAW in the mixing room, a live mix to an outside PA system, headphone monitor mixes via a Klang Fabrik system, various talkback setups and a separate mix going to an on-site video team, primarily via Dante, but also across MADI, AES and analogue signals.

It functions a stage box with 24 microphone preamps and AD-conversion. In the control room, the producer has a DAD Monitor Operating Module (MOM) hardware controller to administrate monitor feeds and talkbacks.

“The system we’re using is based around a DAD AX32, and it has been immensely helpful since it converts between all these various signal formats,” Dynaudio Unheard producer Ashley Shepherd explained. “It has proven itself invaluable, just getting this crazy setup to actually work. And it’s like we’re running an OB truck with a recording studio, while it’s being filmed – and a live concert at the same time. Everything has been working great for us. It’s been bulletproof. Oh, and the sound quality of the mic preamps… They sound wonderful. Wire with gain, basically!”

The concept recently featured at Smukfest music festival in Skanderborg, Denmark, where a total of over 30 bands signed up for a recording session in the Dynaudio Unheard mobile studio.

“The basic idea behind the concept is as bold as it is noble,” said Mikael Vest, sales director at NTP technology, Digital Audio Denmark’s mother company. “So, of course we were game when Dynaudio approached us with this idea. We’re proud that they chose to give AX32 the massive responsibility of handling all of the audio-routing in such a massive and complex setup, and we were pleased to learn that everything worked out smoothly and that so many young and ambitious bands got the chance to record their music in a professional studio.”

Previous What is driving the international pro audio education boom?
Next dBTechnologies heads to PetCo Park for KSON CountryFest