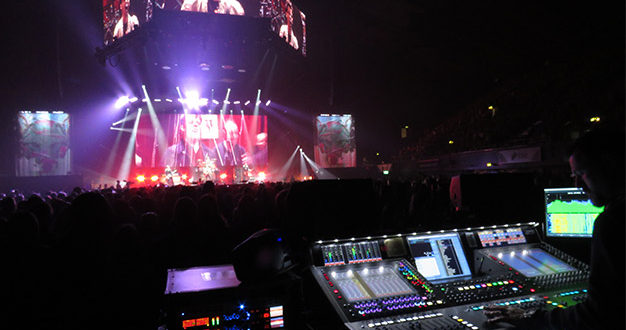 A long-time DiGiCo user, Schopman’s SD10 is running at 48kHz with the SD Racks being shared between FOH and monitors, while he is also a fan of the console’s Snapshot functionality.

“On Stereophonics, I originally looked after (FOH engineer) Dave Roden as the systems tech, mostly on the arena tours,” said Schopman. “It’s only in the last few years that I have taken on the role of monitor engineer for them.

“I love the clarity I can achieve for the IEM mixes using the SD10,” he added. “Everything seems to be easily separated, which means the mixes are very detailed and clean. I have set it up so that most channels are ‘recall safe’. I am using Snapshots for some mute automation on some of the channels and aux send automation on keyboards, acoustic guitars, and the few channels of FX and supplementary playback that we use, which is strings parts and FX, mostly. I also use some early reflections spatial effect from the SD10 on some of the guitars to give them a little extra width in the mix.”

One of the key elements of the overall live setup for Stereophonics is keeping low end minimised on stage, which is achieved through engineering teamwork.

“Our touring systems/playback/stage tech, Sam Cunningham, plays a large part in achieving this, together with the PA system tech when we have our own system,” explained Schopman. “We also make sure that there are no bass notes that pop out, and Dave Roden, Sam and I communicate a lot to make the end result as optimal as possible for both the audience and the band.”

After completing the UK leg of the tour with a performance at RISE Festival in August, Stereophonics descended on North America in September to play a series of shows in Vancouver, Toronto, Chicago, and New York City. Their DiGiCos went with them.