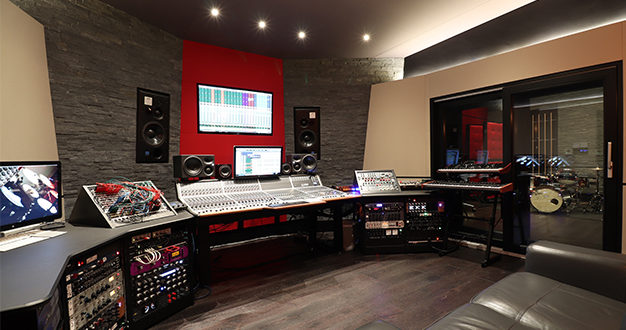 Edward Scull, the studio’s owner, wanted to create a space that focuses solely on the musician and the music itself. "Our mantra is to create an optimum space for creativity to flourish. As soon as you walk through the door the outside world stops, no distractions; a nod to the studios we had back in the day. Choosing a location outside of the city allowed me the freedom to literally create the perfect space, with no height, size and noise restrictions. We have plenty of parking and the most beautiful countryside around us yet we are only a stone throw away from London, just off the M25.”

The studio was installed by Studio Creations and acoustically designed by Chris Walls of Level Acoustic Design: "My studio and vision is centred on having the best sounding live room possible that also feels great to be in,” adds Scull. “The benefits of this are two-fold – obviously to get a great sounding recording, but even more so that the musicians will respond to being in a good acoustic space, allowing them to achieve their best possible performance. There’s nothing less inspiring than recording in a completely dead booth.

"The whole team were an absolute pleasure to work with. Nothing was too much trouble and I was never told that an idea was impossible. Instead I was given options. They could literally install fish tanks in the floor if I wanted it although I am not too sure about the acoustic properties of goldfish!"

The studio spec included creating a great acoustic space enhanced by high ceilings. “I wanted the vibe to be right” explains Scull. “The interior had to create an ambience that supports creativity.”

The aesthetics create a timeless feel using reds and greys and natural slate; certainly no white walls here. The grey slate compliments the dark wooden floor and the Edison bulb vintage film set lamps against the colour scheme bring an old and comfortable feel balanced with futuristic elements. Due to space restrictions the studios’ modern break out area is reached using a spiral metal staircase. The stairwell was initially just a means to get upstairs, however noticing its reverb properties it has accidentally found itself with added tie lines and has been rigged for almost every session: “It has become a favourite feature of mine,” says Scull, “however I think we’re going to have to build another staircase because the stairwell is always being used on recordings!”

For the technical specification, the studio is centred around an Audient ASP8024 HE console which is supplemented by a full rack of top end mic preamps, as well as an indulgent selection of outboard gear from the likes of Neve, Manley, Chandler, API, Thermionic Culture and Prism Sound to name but a few. Scull also has a desirable mic cupboard with over 10 Neumann microphones, Coles and Samar ribbons and all the usual dynamic mics that you’d expect for a professional grade tracking studio. Main monitoring comes by virtue of ATC SCM100ASL, Neumann KH310A, and Avantone Mixcubes and there’s a Livemix AD24 system for foldback. It has the latest Pro Tools HD with 32 channels of AVID HD I/O and the Audient has a DLC section for DAW control.

Scull, who makes up one half of the Rosewood team, has a background in classical music and is a classically trained percussionist, a Foundation Scholar of the Royal College of Music and a winner of the Royal College of Music Concerto Competition. He performs extensively in all the major London Concert Halls and several times a year with Rick Wakeman, while he also recorded the symphonic version of Pink Floyd’s ‘Wish you were Here’ album at Abbey Road Studios. Also known for his work with Sue Perkins, Children In Need Rocks, BBC’s Pitch Battle and Seal, Scull says: "The studio can accommodate all genres, other than perhaps large scale orchestral music. But even then we’ve had some decent results tracking up parts of the orchestra separately. It does seem to have a rock’n’roll feel to it though and is a very comfortable size and setup for a band".

The other half of the Rosewood team is Sebastian Truman, who studied on the Tonmeister course at the University of Surrey and has worked at the likes of Abbey Road, Tileyard Studios, Spitfire Audio and as engineer/assistant to film/TV composer Christian Henson. He has worked with the likes of Sir Paul McCartney, The Military Wives Choirs, Ella Eyre and The Cribs and has worked on TV shows including Poirot, Inside Number 9, and soundtracks for film including Prometheus, The Avengers, Paranorman and Skyfall.

“During my career I have been fortunate to work alongside some of the greatest engineers and producers in the world who taught me a lot about recording but even more so about efficient workflow and proper studio etiquette,” says Truman. “I met Ed who’s exciting plans to build a world class studio were too much to resist. Here at Rosewood the minute you walk through the door we make you feel important and excited to create your vision. Productivity is effortless and technicalities are kept well out the way of the workflow, while the atmosphere is positive and relaxed. It has been my great pleasure to oversee the development of the studio and set the foundations of a long term musical partnership."

Rosewood also offers a mastering service, as Scull explains: “We have a fantastic mastering guy local to us, Maxi Curnow at Horizon Mastering, who is a very close friend of mine. We run it as an in-house service and as we work very closely on projects, we fully understand each others workflow and needs when it comes to track preparation.”

The studio itself is housed alongside Scull’s percussion hire company, offering over 20 top of the range drum kits, over 50 snares, a wealth of percussion instruments including multiple sets of timps and orchestral bass drums, five octave marimbas, all tuned percussion, full latin and ethnic percussion and an array of weird and wonderful sound FX including four and a half octaves of nipple gongs. Arguably an incredible resource to have alongside a studio.

Between the studio and the addition of the percussion hire company, Rosewood clearly offers a wide range of services that can accommodate needs above and beyond a basic studio hire. It is also able to offer remote services including overdub sessions through to writing/arranging/recording without clients actually needing to attend the studio if necessary.

From aesthetics to storage solutions to wall artwork, both Scull and Truman have spent a lot of time making the studio feel right, and are now looking forward to welcoming clients both old and new.