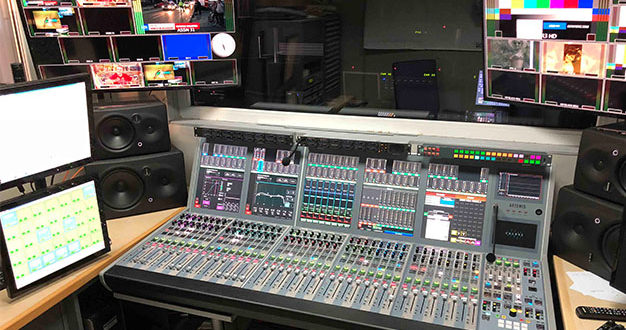 The new consoles are an upgrade from the facility’s Calrec Sigma and Omega legacy desks, and will be used both for PRO TV’s daytime show productions as well as for sport transmissions.

“Choosing the Artemis Light consoles was an easy decision for us given our 12 faultless years of experience with the Sigma and Omega consoles and our in-depth knowledge of Calrec’s console architecture,” said Octavian Diac, broadcast manager at PRO TV Romania.

“Artemis Light is a powerful audio mixer with enough digital processing ability for our current and future projects and great support for several audio formats including Dante, AES67, and MADI.

“We also use Calrec’s Hydra2 networking system, which lets us set up connections between our studios. This offers full redundancy and audio control options capable of handling a large number of I/Os that are shared and controlled, regardless of their location.”

The two consoles are building on additional previous Calrec technology installations including the router core PRO TV purchased previously, which is used as a central point for sharing I/O resources and console router connections across its studios.

“Working with a broadcaster as prominent as PRO TV Romania is a testament to the versatility of our Artemis consoles. This is also illustrated by how they’ve leveraged the power of the Hydra2 network, which has given them great flexibility. We’re so thrilled to continue our longstanding relationship with PRO TV Romania and to give them the audio tools they need to provide such high-quality broadcasts to millions of viewers,” said Mike Reddick, international sales manager, Calrec.