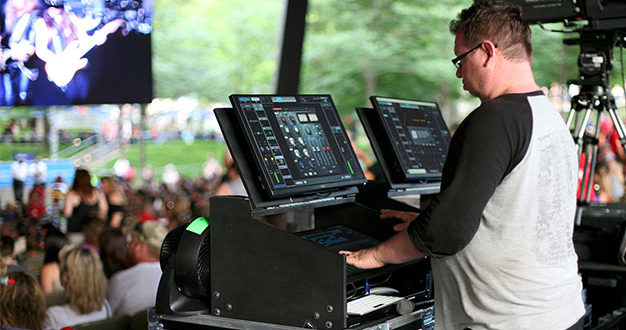 FOH engineer James Gebhard (The Killers, The Strokes, Ride) has shared how mixing with plugins inside his Waves eMotion LV1 Live mixer helps him achieve studio-level sound while on tour with English rock band Whitesnake.

He also uses a Sennheiser SPB 8000 unit for 5.1 audience recording at FOH. The SPM 8000 microphone is Y-split and routed into the DiGiGrid IOC, and two mic pres are also routed into the SPB8000 module. He takes the 5.1 AES feeds from the SPB8000 back into the DiGiGrid IOC AES inputs, so he can record a straight L+R audience mic feed, alongside the full 5.1 feed on the AES inputs, “meaning that there is no need to process the signal at mixdown if any of the shows are used for anything later, since it’s all there on the recording!”

About the benefits of using the LV1, Gebhard said: “Two things above all: the sound quality – the separation and definition are at a level I had never heard before in a live environment – and the ease of setup. Easy setup is a major bonus, since on this tour I do not have a FOH audio tech with me. All I have to do is ‘unlid’ a few flight cases and plug in a few cables – literally, that’s all! My LV1 setup is on wheels and just rolls into place, and presto, I’m ready to go.

“Plugins that feature heavily in my show-file include the Waves Scheps Omni Channel, which sits across my rhythm section (kick, toms, bass) and just nails it live with minimal CPU. The SSL E-Channel sits across all my silverware (hi-hats, four channels of overheads and ride). The Scheps 73 is used on my snare mics and on my guitar sub groups. With the Scheps 73 on my stereo guitar bus, I can slightly EQ the high-mids and highs differently between the two channels, to give the quite narrow stereo field a perceived wider image without it actually being so. The API 2500 compressor is used on my four channels of guitars and all seven vocal channels (including spare). I own a few analogue 2500’s, and to be able to have an almost endless amount of them on the LV1 makes me a very happy engineer. I use the F6 Floating-Band Dynamic EQ on all of my sub groups (drums, bass, keys, stage left and stage right guitars and backing vocals) and on Whitesnake frontman David Coverdale’s main vocal.

Gebhard concluded: “So, even before the LV1, using MultiRack alongside my console of choice gave me the ability to create and sculpt the sound I wanted with Waves. But for me, the LV1 has taken it to the next step: I have now gone from being a live engineer to being a live producer. The direct access to all the plugins right there in front of me, inside the console, together with the amazing sound quality, has taken my engineering skills up a few more rungs up the ladder.”