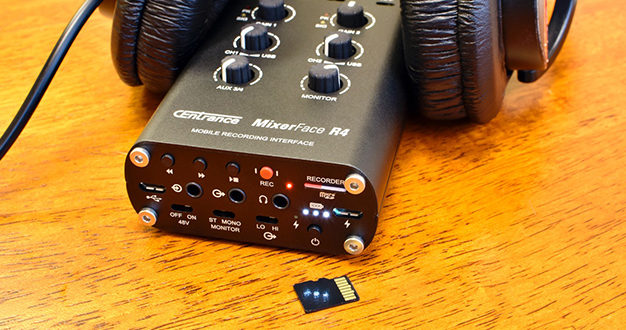 CEntrance has announced the launch of MixerFace R4R, a new version of the company’s mobile recording interface that now comes with a built-in audio recorder.

The new model from the US-based manufacturer retains all the features of its parent MixerFace R4, which was released in July, but adds a built-in, "one-button record," stereo micro-SD card recorder for added in-the-field flexibility and extra recording redundancy.

The built-in SD card recorder in the R4R enhances those applications as it captures audio immediately, without waiting for the phone. It is also possible to stream audio via the phone, while recording a local copy to the SD card.

The tripod-mountable device will be also appealing to video bloggers and DSLR videographers. Paired with a smartphone or a video camera, the product improves audio quality over typical on-camera audio, in turn improving production values of semi-professional video shoots. R4R will also add redundancy to live streaming events.

"With MixerFace we have made professional location recording accessible anywhere. These handheld, travel-friendly units fit in a gig bag and sound great, lasting for a whole session on a full charge," said Michael Goodman, CEntrance CEO. "The internal world-class A/D converters were borrowed from our award-winning Hi-Fi products. They are protected by the lightweight, aircraft aluminium chassis and deliver professional sound quality in a small package. This portable marvel will liberate recording from the confines of the studio and let you find inspiration anywhere."

The new MixerFace R4R has an MSRP of $449.99 (SD card not included) and is now shipping to US dealers and worldwide distributors. CEntrance is also shipping the original "MixerFace R4" model (without the SD-Card recorder) with MSRP of $349.99.