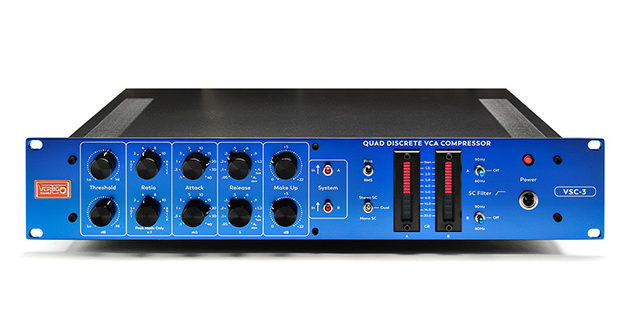 In a robust and fairly deep (400mm/16”) 2U enclosure, the VSC-3 retains the good looks of the earlier unit, including a blue front panel with an almost jewel-like appearance. As with the VSC-2, the ‘Quad’ in the name refers to the use of four discrete proprietary 1979 VCAs (voltage controlled amplifiers) as its main control elements, one in the audio path, and one in the sidechain of each of the compressor’s two channels. At first glance, the main controls are little changed with, at left, a row of knobs per channel comprising Threshold, Ratio, Attack, Release and (gain) Make Up.

Threshold and Make Up were continuous pots in the review sample – the others are switched – but an all-switched option for easier recall is available. Closer inspection reveals that Vertigo have tweaked the time constants in the new unit as the number of Attack and Release settings have increased from six to ten each, Release including a new fastest .05 mode and two auto-release positions, ‘fast’ and ‘slow’. To the right are dual switches for channel bypass followed by another new addition, a Peak/RMS toggle to act either on signal peaks or with averaged detection. Peak (the VSC-2’s only mode) works well for rhythmic music, whereas RMS is effective with ambient and other styles where a more ‘glued’ action may be appropriate.

Below Peak/RMS is another addition, a three-position Sidechain switch labelled Stereo, Mono and Dual: Stereo runs the VSC-3 as a true stereo compressor where peaks from either channel compress both; Mono sums the two sidechains and is aimed at compression for effect (both Stereo and Mono disable the bottom row of knobs for simpler linked operation); and Dual separates both channels and metering: with impressive >-100dB crosstalk, this should be useful for the track or mix engineer compressing two different mono sources, such as bass guitar and lead vocal.

Next up on the front panel is a pair of sensitive but wide-ranging (0.25-20dB) bargraph gain reduction meters, developed in-house, and which I personally prefer over the original SIFAM mechanical meters – the SIFAMs’ unavailability was a catalyst for the VSC-2’s makeover, as the additional panel space left room for new features. Apart from a power switch (always nice to see one at the front), the last control feature is a pair of sidechain filter switches, which when engaged roll off the compressor’s sensitivity to low frequencies from either 60 or 90Hz.

Once the VSC-3 was set up at Lowland Masters, I ran a selection of mastering projects old and new through the unit including a fine recent album, Turn To Fray, for UK folk duo Hickory Signals. Their song Who Put The Blood is mostly acoustic guitar and voice until about a third of the way through, when a dramatic low drum part makes an appearance. The challenge was to maintain light compression of the upper instrumentation while avoiding drum hits dipping the whole track, plus preserving the overall ‘wallop’: the Vertigo managed this with aplomb, helped by the wider attack and release settings and the 90Hz sidechain filter.

I really like the core nature of the VSC-3’s compressor action: any given input may have a number of potentially usable compressor settings, empowering the operator to make a suitable choice in context, and driving it harder increases second harmonic distortion which can add useful colour. From a personal point of view, I also found that ten years’ additional experience with compressors of all types made me appreciate the Vertigo’s response more – for me there was an immediate feeling of comfortable familiarity once I started listening. The VSC-2 added a slight sheen or polish to the sound: this is still the case in the VSC-3 (presumably a side-effect of the VCAs, or possibly the Cinemag input transformers), and I found it to usually work to advantage.