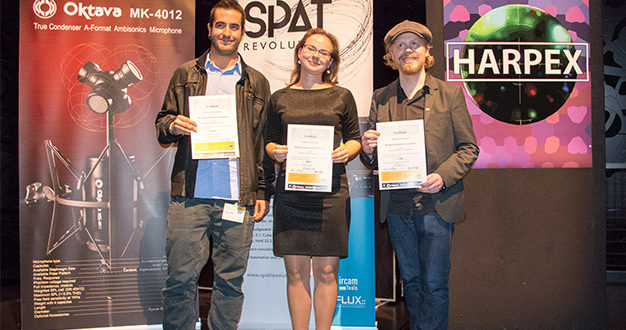 The upcoming 30th Tonmeistertagung will again see the winners of the Student 3D Audio Competition announced.

Established by the Institute of Electronic Music and Acoustics in Graz, Austria, this is the second time the competition is taking place. Students from all over Europe were again invited to enrich the competition with extraordinary 3D audio productions in three categories.

To commemorate this year’s award ceremony, the nominated pieces will be presented to the TMT audience under optimal 3D monitoring conditions, achieved by installing state-of-the-art multichannel systems. Selected by a panel of judges, the works will be presented at a special event in the large R5 hall at the Tonmeistertagung in Cologne on Thursday, 15 November, from 6 to 8pm. Attendees can enjoy the winning entries on a premium-quality Ambisonics sound reinforcement system.

Hosted by VDT, the 30th anniversary of the Tonmeistertagung is generally devoted to 3D audio technology and its potential for immersive spatial audio as boosted by recent market trends in virtual reality. The event provides opportunities to experience firsthand the latest developments in spatial audio recording and reproduction.

Throughout the convention, there will be possibilities to critique current and innovative productions in Auro 3D, Ambisonics and other formats in specially optimised installations, while workshops and lectures will extensively cover applications ranging from recording to reproduction and live performances.

“This year is the second time the European Student 3D Audio Production Competition is taking place,” said Matthias Frank from the IEM Graz. “A panel of 17 international judges reviewed 27 entries in three categories. In the presence of the judges, the top three in each category will present their works to the public in a grand finale and receive their awards.”