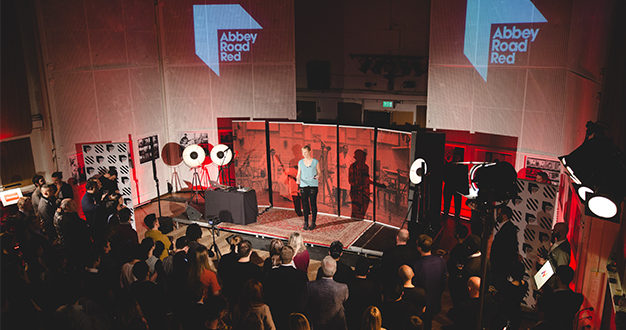 Fanous says that an important part of this is putting on events that covering core topics. “The last one was on the science of A&R, while previous Red talks have covered spacial audio, interactive audio, Artificial Intelligence (AI) and generative composition and the roles they play in production.”

The incubator was launched in 2015 because the team at Abbey Road noticed there was a lot of talk of the potential for entrepreneurship happening around the audio business. “We saw that as an opportunity to start an incubator,” says Fanous.

“Abbey Road is perfectly placed to nurture this as there’s such a rich history of innovation here, including the original record and engineering development department who created the first Redd console and developed Automatic Double Tracking (ADT) technology. We want to help people create the next set of universally adopted music technology in much the same fashion as our predecessors had done at Abbey Road.”

Mirek Stiles, head of audio products Abbey Road Studios says that Abbey Road Red is definitely a throwback to the history of the company.

“EMI used to have these huge R&D facilities in factories over in Hayes in west London.” Hayes is somewhat of a veteran at Abbey road, starting as a runner and then becoming involved in recording, video, audio hardware and software and now, other forms of innovative audio technologies.

“Abbey Road was always seen as a bit of a field testing facility. The work we did with the plug-ins, the software and the hardware with (the company) Chandler gave us a sense of this history, as did going through the old archives for the schematics of classic equipment – so we thought, wouldn’t it be great to ‘get Red back together’?”

The company discussed how to implement a contemporary version of this kind of low level early research and Initially started getting involved with academic institutions. “We still are doing that,” says Stiles.” There is a lot of great research happening in this country, especially with regards to music technology.” Stiles and his team began to develop relationships with potential start-up companies. “We noticed that there were quite a few incubators around but nothing specifically targeted at music. I think at the time we were Europe’s first music-focused incubation programme.”

“Some amazing start-ups have come through the program,” says Fanous. “Initially, we’d work with companies on areas such as spatial audio or automated mastering and concentrate on people-networking and finding collaborators and equipment.”

At the time of writing, Abbey Road Red was about to announce their thirteenth start-up incubator, joining a programme that has a collective valuation of over £100 million.

“They’re pushing the boundaries,” says Fanous. “It’s amazing to work with these company founders, to feel their passion and to see them literally living out their life’s work and to be able to help them.”

Stiles says that when Abbey Road Red started to exploring how they would engage with start-ups, it was new territory for them, and there was a quite a bit of apprehension. “But that proved completely unfounded,” he says. “We really enjoyed being involved and embracing the tech community and the academic community and, luckily, they’ve embraced us as well. The Abbey Road Red incubator runs over a six-month period.

“We feel that this is the right amount of time,” says Fanous. “Three months would have been too little time to make a difference and anything beyond six months you kind of tend to lose your focus on the path that you’re taking together.”

Abbey Road Red has an ‘onboarding process’ where they work with start-ups before they actually join the incubator programme. “We’ll have been developing a relationship for a long time with them already, so we tend to know the teams and their platforms and technology quite well,” says Fanous. “Then we have a formal process in which we sit them down with the team here at Abbey Road and look really hard and see what any barriers to development there might be, how their business case is looking, what their potential is and how we can help them unlock that potential.”

Fanous adds that Abbey Road Red has moved away from ‘fixed intake periods’ to a rolling intake that allows for a more natural development of the start-up. Potential collaborators are found either from direct contact via the website or through the networks Fanous and Stiles have built up.

“We work very hard to make sure we’re out there talking to people and building relationships and making people aware of what we do,” he says. Fanous adds that a lot of company founders approach the team directly, but they also do a lot of active searching for possible collaborators.

“We always make sure that we’re out and about talking to people and going to key conferences and so on,” he says. With the Abbey Road brand involved, the incubator is able to attract some of the most innovative talent to work with – and it’s obviously bearing fruit. Abbey Road Red builds on the studio’s well-respected legacy in the audio industry and brings it slap-bang up to date by helping to nurture the next generation of audio innovators.