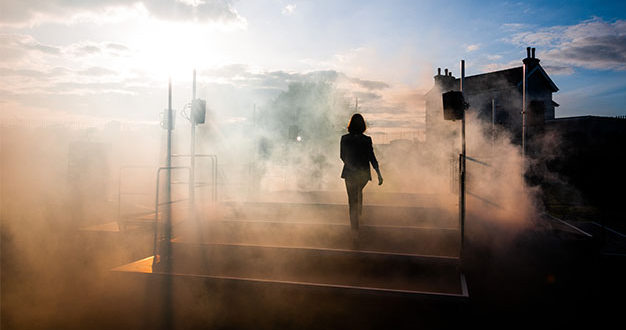 Martin Audio’s MLA, with its multi-cellular control, recently provided the playback solution for a unique concept known as ‘Fathom Atlantic’, part of The Atlantic Project festival of contemporary art in Plymouth.

The installation of an original work of sonic art at the City’s Devil’s Point explored the boundaries between water and air, using only sound. It was a reimagining of the ‘soundscape’ originally conceived in 2014, for which Martin Audio MLA also provided playback. The project presented experienced sound recording engineer Simon Honywill with one of his most challenging tasks ever.

Phase cancellation was used to produce a sonic surface, immersing visitors in an eerie above- and below-surface simulation. Pre-recorded underwater sound was mixed with live acoustic transmissions from the River Tamar, enabling the audience to ‘climb through the fathom’, via a platform 6ft above the ground.

To deliver the sense of realism, technical director Simon Honywill chose eight stacks of five MLA arrayed loudspeaker elements, in a 20-metre ring around a diamond shaped stage. As Honywill put it, the installation gave visitors the sensation of surfacing from beneath the waters of Plymouth Sound, without getting wet — having experienced other-worldly noises of the local marine environment, as they happened, and hearing the sounds of passing craft from above and below the waves.

All were relayed via live hydrophones in the water and a series of recorded multi-track loops, recorded by sound engineer Jay Auborn at the local dBS Studios. The sound was relayed through the circle of MLA. Walking up the staging brought visitors out of the water into a soundscape generated by live microphones positioned above where the hydrophones were placed. This was played out using a ring of eight Martin Audio DD6, mounted on poles at exactly one fathom above the ground.

“Of all the things that Fathom achieved, for me the most significant was the way that it engaged people with sound,” said Honywill. “We are surrounded by it, yet we take it for granted because visual stimuli usually takes precedence at every opportunity. This was all about the sound for sound’s sake, which for a cynical old engineer was supremely refreshing.”