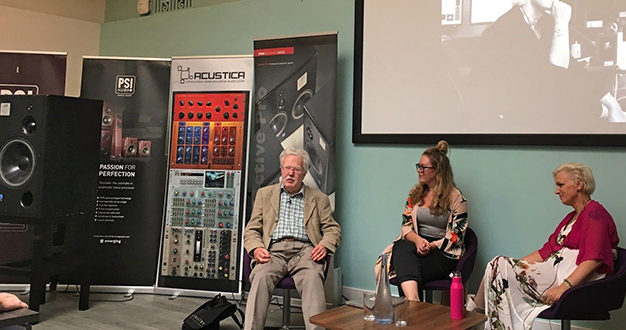 The first mastering conference hosted by the new AES Mastering Group at University of Westminster, London last month saw mastering engineers from as far afield as LA, New York, Australia, Sweden and France join the UK’s mastering community to discuss the future of the industry.

Continuing the discussion around new formats, Bob Stuart, creator of MQA, discussed how he views the market place and parameters around take up based on the experiences of past technologies. David Bell from Whitemark delivered a keynote apprising the key aspects he considers in room design for mastering, while there was also a paper by Magdalena Piotrowska regarding comparative examination of automatic mastering systems and outcomes.

The final keynote of the day was from Darcy Proper, in conversation with Prof. Robert Toulson about the implementation of surround. To round off the day they were joined on-stage by speakers from across the conference for a final plenary debate. This triggered some interesting discussions around delivery, ‘the consumer’ and expectations of ‘us’ as mastering engineers.

The Sunday kicked off with papers around remastering and how/can mastering effectively be taught in Higher Education. Mike Wells delivered an appraisal of loudness in the marketplace and applications to address this with consumers. Mike Cave discussed his approach to stem mastering, and Crispin Herrod-Taylor (Crookwood) delivered an exportation of the current and future market place for mastering engineers. The day was rounded up with Mandy Parnell being interviewed by Katie Tavini from a new generation of engineers.

On the whole, the debate and communication between professionals has started the mastering group off on a positive trajectory, leaving everyone involved looking forward to the next meeting.

Previous What does the Music Modernization Act mean for producers and engineers?
Next Leslie Ann Jones to receive NAMM TEC Hall of Fame Award