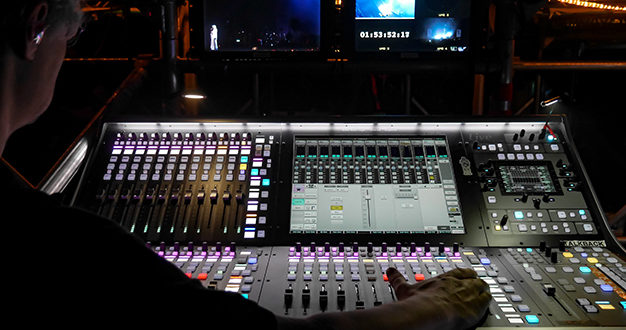 The desk was supplied by UK tour and events company Capital Sound Hire.

The aesthetics and design of the show created a few side challenges. Firstly, the monitor console position is under the stage, so video feeds are used for sight to stage. The backline is also under the stage, out of sight, as are the guitar and bass pedal boards.

These factors all make good communications even more critical than usual, and as Tempany is also the hub for band-to-band and band-to-crew communications, the monitor position has additional critical roles: “There are a lot of talkback mics," said Tempany. "I think I’m up to 17 channels of communications now. All the musicians and techs have shout mics and there are a few techs with switches that route their talk either to the band and crew or just to the crew.

"The production comms are also fed to my cue bus so we can follow what is happening at the top of the show. This all means that the cue mix is quite busy with not only the solo bus in play, but a lot of information being passed around on top of it."

On stage and up front, Kylie herself uses four microphones in custom colours to match her costume choices, and Tempany uses the SSL’s Stem Group path type to group all four microphones as a single input to the monitor mixes. "It becomes one fader and one channel where I can adjust levels, EQ, and dynamics for all four mics during a show," he explained. "If one player wants to vocal up a bit, I simply do a group automation change in relative mode on that stem in their mix. It then scales for all mics through the show.”

"One of the really useful new features is Screen Query," Tempany added. "You can now query an on-screen channel rather than a fader-tile channel, so all the available tiles can be used for the query result. It’s great if you have a lot of channels on an L500, or it can make using an L300 feel like using a three-tiled L500. I just love the sound, and the reliability, of SSL Live.”

Previous Music recording Industry Insight: What can we learn from the past 20 years?
Next What does the Music Modernization Act mean for producers and engineers?