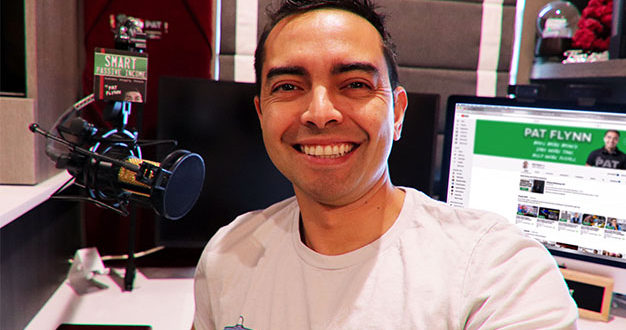 Popular podcaster Pat Flynn is using his Focusrite Scarlett 2i2 USB audio interface to achieve clear and highly intelligible sound for his voice across all five of his regular podcasts.

Having first implemented the Scarlett 2i2 about four years ago in his podcast studio in San Diego, CA, Flynn also takes the highly portable interface along with him to conferences and podcast gatherings nationwide, plugging his microphone into one of the 2i2’s XLR inputs and outputting a signal through its USB output.

Flynn is best known for his blog and podcast Smart Passive Income, where he conducts income experiments and shares the results online with his millions of followers.

“The Scarlett 2i2 has become an integral part of my podcasting,” said Flynn, whom Forbes magazine last year recognised as one of ‘the 25 Marketing Influencers to watch.’ “As an interface, it lets me use my microphone of choice, with perfect level matching. It has two inputs, which makes it easy to plug a second microphone in when I have a guest on a podcast. It sounds great and it gives me a lot of control over the sound — the mic pre’s are very natural sounding with plenty of gain, and it has a separate volume control over the headphone output, which is important if we’re podcasting in a noisy environment.”

“It’s incredibly simple and easy to operate,” Flynn added. “The things it lets you control are the things that are important to me as a podcaster: sound quality, volume control, portability, and reliability, and it’s not burdened with complexity. It’s become a part of what I do every day, and it does it well. That’s why I use it and recommend to others. In a podcast, all you have is your voice. It has to sound good, and the Scarlett 2i2 makes sure I do.”