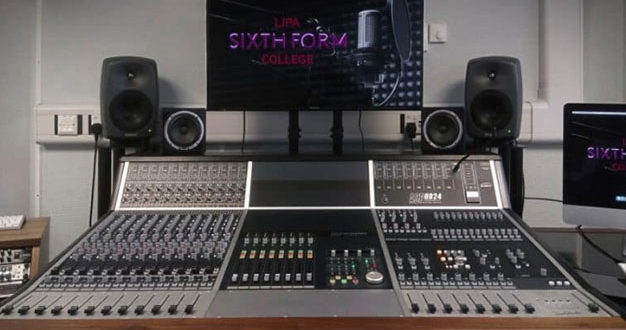 An Audient ASP8024 Heritage Edition has been installed at the brand new recording studio in LIPA Sixth Form College.

One of the newest colleges in Liverpool, LIPA Sixth Form College focuses on performing arts and is now entering its third year.

Sound technician John Kershaw – a LIPA graduate himself – is very pleased at its arrival: “It is our hope that tech students from LIPA Sixth Form will graduate and gain a place at LIPA HE to study on the Sound Tech degree programme,” he said. “Having already used the ASP8024-HE in college, they should feel right at home with LIPA’s studios housing two original ASP8024s.”

LIPA takes on around 15 Sound Technology students every academic year, who will spend most of their time between the recording studio, Mac lab and theatre. “We also have a couple of Audient iD4 audio interfaces dotted around the college,” explained Kershaw. “These little boxes are great for recording vocals, dialogue and for re-recording individual tracks on studio projects. They look and feel like the master section of an analogue desk.

“In our new studio, we are running an Audient ASP8024-HE desk with 12 input channels, DLC control and master section with an Audient ASP880 patched in for expansion when needed,” he continued. “Using an iMac running Logic and Pro Tools, the ASP8024-HE provides students with the best of both worlds; analogue inputs and digital control. Students are able to set up their sessions based on 2 preset projects:

“One understated feature of the ASP8024-HE is its noiseless power supply. This is a huge advantage for anyone working in a small control room where fan noise from the desk, computers and other devices can really affect your mixing.”

Everything in the building is networked, so that studio projects can be accessed anywhere: “This is great for teaching staff who need to check the progress of work without disturbing current sessions,” concluded Kershaw. “It is also great for students who need to work on projects without having to book the studio, saving precious time.”

Previous Tube UK to host Yamaha RIVAGE training event next week
Next In the studio with: Mike Exeter