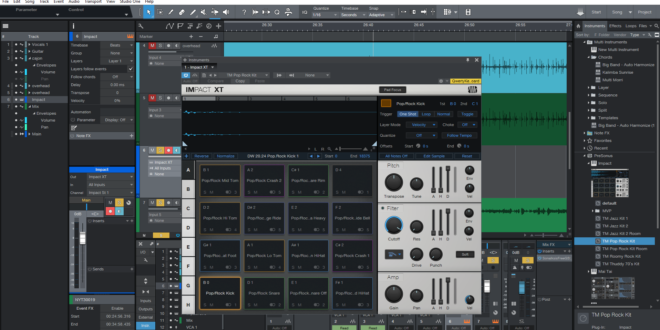 Modern DAWs are all a mixture of strengths and capabilities – that makes sense when you consider the breadth of applications that DAWs are called to deal with – music composing and production, mastering, multi-track recording, sound for picture and broadcast. And within each of these broad categories there are a myriad options and functions that are more or less important to users depending on exact nature of their workflow.

There’s no doubt that Version 4 of Studio One has hit the music composition production pedal pretty hard. When you look in Version 4’s new features shopping trolley, there’s a bucketload of shiny production tools right at the very top.

Take the new chord track which is grabbing much of the headlines. Studio One can now analyse audio (yes audio) or midi data and work out the chord changes automatically. That new chord track displays the chord information about your tune and there are a slew of features for chord manipulation. One of the simplest uses of the new chord-based features is using them to blag a track you don’t have.

So you have a keys track and you want to add bass. Using automatic chord detection you can extract the chord information, display it in the chord track and then apply it to a few bars of a bass sequence and hey presto the sequence notes will ‘follow’ the chords of the keys track and you have a bass line for free. You can detect key signatures, replace and change all instances of individual chords and generally speed up your work no end. A word on chord detection – remember this is OCR for music – you will want to check the software has made all the right decisions in all the right places.

In sequencing Impact XT is a massive upgrade to the previous Impact incarnation. There are improvements to be found everywhere. You get eight banks of pads all colour codable. Editing has grown up with a raft of new features including auto-slicing files on import – neat. Then there’s Patterns – sort of step sequencing for big boys. A shortcut for this would simply be to use cmd+shift+P, rather than crawling through the menus.

Sampling next. And Sample One XT – offers trimming, normalising, auto-slicing, envelope based editing and extensive effects – is a revamp that means you can bring your workflow inside Sample One rather than just relying on it as a sample playback device. My favourite touch is the recording. You can record from just about anything, instruments, busses, tracks even live into your machine. And with the gated recorded option you can automatically split up the recording into individual samples adjusting the gate start and stop thresholds to match your programme material.

Although producers, composers and EDMers, have probably got most to rejoice over – there are still jewels and nuggets for engineers to enjoy.

For many the biggest deal will be the inclusion of AAF (Advanced Authoring Format) support for import and export compatibility with a wide range of other software from ProTools to Premiere. There are some differences in levels of support – ProTools exports stereo files as left and right mono tracks and you will get edits and fades but not plugins. This a great professional step forward for people working cross platform, but all Studio One users can benefit from Song Data import.

Set up a song to use as a template, with all your tracks, busses and effects and then import the bits you want into your current project whenever you like. You invest some time in set up but then get the rewards almost every time you mix. ProTools guys will recognise this as import session data.

There’s a new Ripple editing mode that automatically closes gaps when audio is deleted or altered in length. And Ripple is clever enough to shift material right or left depending on the point at which you are making changes to the timeline.

Studio One Version 4 Pro comes with a copy of Melodyne Essentials and builds on the synergy of the two packages. Version 4 is ARA 2.0 ready and this means access to multitrack files in your tuning workflow.

Studio One just keeps getting better – I’m particularly keen on the interchange options with AAF and the new VST plugin scanner – but maybe you will at last find that ‘lost chord’.