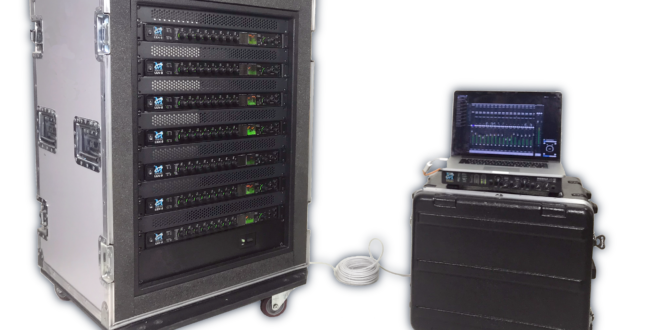 AOIP: Past, present and future

Audio over Internet Protocol (AoIP) is revolutionising the professional audio business, enhancing the capabilities of professionals in the field and presenting manufacturers with various opportunities to expand on their networked audio offerings. Stephen Bennett reports…

My first brush with networked audio systems was with the Blue Box powered monitors from SA Vintage in the Netherlands. Although the manipulation of the audio was primitive by today’s standards, the limited computer control of flown speaker systems was useful and saved all that mucking about with cherry-pickers. Fast forward to 2018 and Audio over Internet Protocol (AoIP), née ‘networked audio’ is firmly embedded in complex distributed audio systems, especially in the broadcast audio and live arena. Connectivity is important so protocols are needed so devices can talk to each other but as is usual, we audio professionals love ‘standards’ so much we often just can’t get enough of them!

Roland Hemming of RH Consulting has recently undertaken research into AoIP and has produced is the most comprehensive list of networked audio products and protocols to date. Top of that list—by implementation in actual products—are Audinate’s Dante and Cirrus Logic’s Cobranet, with Ravenna snapping at their heels. (See Fig 1). Dante uses traditional internet protocols and off the shelf hardware, so it’s easy to see why it’s been so widely accepted, while Cobranet is widely regarded as the first commercially successful AoIP protocol, and is still in use in many legacy products. But numbers aren’t everything and different manufacturers choose different protocols depending on the application and outcomes required.

Focusrite started along the audio-over-IP path in 2010 and at that time, there were few AoIP options available to them, says Will Hoult, senior product manager at Focusrite Pro. “Developing our own technology would have taken a significant amount of time, so we decided to look at external solutions. We knew Audinate’s Dante was a viable technology and the company shared with us their vision for the future – which really fit with our approach.” Focusrite worked with Audinate to expand the Dante feature-set, broadening sample rate support up to 192kHz and adding an enhanced clock skew range for running varispeed. “In 2011 we announced our first generation of AoIP-enabled RedNet devices which are still in use in many studios around the world today,” says Hoult.

RedNet, comprises a variety of conversion interfaces, each providing a different type of I/O to and from the network. These includes analogue line level I/O, AES3, a Pro Tools | HD bridge and remote-controlled mic preamplifiers in a 1U rack format such as the RedNet MP8R 8-channel mic pre. “We also have a 128 I/O Dante PCIe audio interface card with very low latency drivers, which is perfect for ASIO and Core Audio workflows,” says Hoult. All RedNet products are controlled and administered Focusrite’s RedNet Control software, while Dante Controller is used to manage data subscriptions between devices. “Focusrite also has a range of traditional audio interfaces—The Red range – which provide a combination of line level I/O, mic preamplifiers, ADAT and S/PDIF I/O as well as monitoring outputs of the Red 4Pre, Red 8Pre and Red 16Line. Each features 32 channels of Dante I/O as well as 64×64 channel Pro Tools | HD DigiLink Mini and Thunderbolt Core Audio interfaces.”

Andreas Hildebrand of ALC NetworX GmbH, says that Ravenna is the leading audio networking protocol for broadcast, as others don’t offer the features that are specifically required for those applications. “It’s an open standard, not tied to any one vendor,” he says “You can adopt it freely or work with companies who can help manufacturers adopt it or supply Ravenna networking hardware or software.” One of the companies that implements Ravenna is Merging technologies, developers of the Pyramix DAW and HAPI and Horus interfaces.

“Ravenna was developed as an open format – you didn’t have to purchase a particular hardware card or whatever, but as a developer you had to do all the work yourselves,” says Mortimer. “Audinate were offering a more ‘off the shelf’ package, but you are then tied to buying their hardware.” Mortimer says that what appealed to Merging is that Ravenna had a lot more scope for personalisation and, crucially, will work above 192kHz and up to DSP 256 – Dante is not designed to work at such high sample rates and also has some track count and I/O limitations in comparison.

“It became obvious that those manufacturers using Ravenna were making their own control management tools,” says Mortimer. “Merging have a (free) mature product called Aneman, while a larger version is in development for more complex systems. This enables the user to see all devices on a AoIP network, so you could group devices in rooms, zone those off, check the status of your network and hardware and administer the routing then save these configurations as presets.

“Ravenna offers full AES3 bit-transparency, can offer MADI-like performance or can even go up to 384 kHz sample rate,” says Hildebrand. He adds that AES67 can act as a ‘connective glue’ for differing networking systems.

“When developing Ravenna we worked very closely with the AES67 task group and that protocol is now a sub-profile of Ravenna. They are very closely related. The main difference is that Ravenna offers discovery, redundancy and more options.” Hildebrand says that there is a growing community of manufacturers and products using Ravenna who just wish to be AES67 compliant.

“Networking in the live arena has been around for decades using technology like serial busses. However modern network technologies have revolutionised the live sound sector,” says Ben Tucker, product support engineer at Martin Audio. The company’s systems are widely used in complex live applications and use a proprietary AoIP system in their products “Our flagship MLA system is a fully self-contained solution to live sound reinforcement,” says Tucker.

“Each cabinet within the system has a multi-channel amplifier with intelligent DSP and associated U-Net network AoIP technology giving the user the ability to design and control a sound system providing extremely consistent coverage and situations where noise abatement is a factoring issue.” The U-Net network itself is a redundant ring, fault-tolerant protocol with the ability to carry 64 channels at 48kHz or 32 channels at 96kHz of low latency, 24bit digital audio plus control and monitoring data. “Unlike a conventional Ethernet protocol, U-Net contains positional data within its redundant ring which ensures the individual cabinets within connected system are receiving the correct information.”

Although AoIP has become de rigueur for complex live systems, conventional studio and broadcast audio applications are catching up fast, with some companies straddling both areas. “Ethernet AVB is the networking backbone of our Venue S-3LX live sound system, including the control surface, the engine and whatever I/O is installed,“ says Derk Hagedorn, senior marketing manager of live sound and studio consoles and controllers at AVID. “We also use it as the connection to Pro Tools on our live systems, supporting up to 128 channels of recording and playback via a single CAT5 cable and removing the need for a separate HD rig.“

AVID has used Ethernet AVB since 2013 in their Venue S3L-X small-format live consoles and Hagedorn says that the protocol’s advantage is that it’s non-proprietary and based on IEEE standards. “We have been part of the Avnu alliance since the early days along with a lot of AV players, and are also now a member of the new Milan group. This group is tasked with improving the AVB protocol to ensure that , for example, audio streams will be understood by the receiving device and adding the ability create ‘profiles’ in a similar fashion to Ravenna. “We also support Dante,” says Hagedorn. “We offer option cards for the PT Matrix studio interface on the live sound side and we also have a Dante card that plugs into our stage racks.”

Metric Halo, the Florida-based purveyors of hi-end audio interfaces, have recently introduced their ‘3d’ system that ties together their different products via AoIP. Rather than use existing protocols, the company decide to develop their own – MHLink – as B.J. Buchalter, vice president of R&D at Metric Halo explains.

“Other network oriented protocols are designed to provide virtual snakes between units over the network,” he says. “While that provides a number of advantages in throw/catch applications, it does not provide a modular, yet unified mixing system. MHLink can act as a virtual snake in point-to-point applications, while still providing unification of the mixer and processing on both ends of the snake.” Buchalter says that MHLink is a complementary technology rather than a replacement for other protocols.

“MHLink works with MADI and Dante (and other digital interconnect technologies), in that the user can take advantage of MHLink’s ability to aggregate hardware seamlessly with ultra-low-latency, while still providing high-bandwidth links to other systems. You can even use 3d and MHLink to format convert between any of the I/O types that we support.” The MHLink Direct Connect technology supports transportation of up to 128 channels of I/O at up to 192kHz to and from the computer via a software-only driver; and Buchalter claims that this is far beyond the capabilities of any of the other existing network solutions.

“Genelec’s 8430A audio-over-IP monitor supports AES67 and Ravenna,” says Aki Mäkivirta, director of research and development at the company. He says that Genelec has selected the technology that makes the 8430A maximally compatible across all manufacturers and devices via compatibility with AES67 and believes that AoIP brings many advantages to the Genelec system.

“Audio-over-IP is, by virtue of its nature, agnostic to the audio format,” he says. “This may be the single most important benefit over any of the earlier technologies. It can, in principle, support any word length, any sample rate and even any method of coding the audio content. Everything can be equally carried with the same transmission system via IP packets.”

Mäkivirta also says that one of the advantages of AoIP is that there is no compromise in audio quality and very low end-to-end latency. “For the AES67 interconnectivity standard for audio-over-IP, the default end-to-end latency setting is 1 ms, with options available starting at about 100 micro-seconds upwards,” he adds.

“The great thing about AES67 is that it has established the ‘least common denominator’– the settings and formats that are always available in all compliant devices.” Mäkivirta adds that AoIP also has other advantages. “This is related to the clock distribution system. Traditionally we have been using the house clock, which is typically a signal that is shared among all the equipment participating in processing audio. Audio-over-IP is connectionless technology, meaning that no permanent connection is established between the transmitter and receiver but instead individual data packets are routed in the network.”

This Precision Time Protocol (PTP).technology has been standardized as IEEE 1588 and Mäkivirta says that this enables devices to be ticking with exactly to the same clock with an accuracy better than 1 ns. “Needless to say, this also allows very flexible working with other media signals, such as video.”

With the introduction of the AES67 standard for AoIP, different systems and protocols should be able to seamlessly communicate with each other at reliable levels of performance, while the individual companies can utilise other protocols and hardware alongside that suits their particular applications. In many ways, it’s difficult to understand why networked audio has taken so long to take off – the CAT5 connector has been on computers for a long time and the physical format remained unchanged while other forms of connectivity have come and gone – but its simplicity and the ubiquitous nature of networking technology should mean that Audio Over Internet Protocol will continue to play an essential role in complex audio systems in the future. 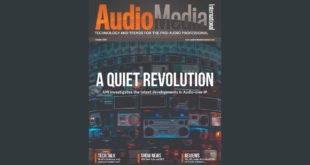 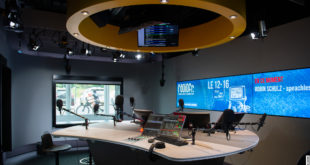