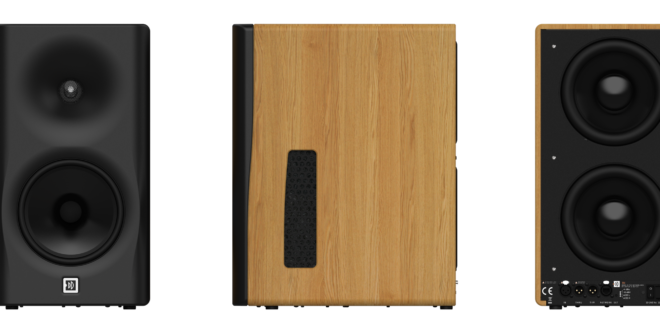 Late last year I came across a discussion on an internet mastering forum about a new stand-mounting active monitor, with what’s establishing itself as a standard toolset: cardioid response to the rear, impressive neutrality and bandwidth, plus digital conversion. Also in this case, the ability to use a front wall in a similar way to an in-wall monitor. The speaker, the 8c from Netherlands manufacturer Dutch & Dutch (D&D), particularly caught my interest, as some of the early adopters were mastering engineers.

These are mounted in a moulded ABS baffle with a waveguide, rounded edges to reduce diffraction effects and a company logo with an LED function indicator. The main body of the cabinet is solid oak on a birch plywood internal frame (no MDF and veneer here!), a rectangular port on each side being the first obvious departure from similar-looking boxes – it’s the key to the 8C’s cardioid response to the rear above 100Hz, helping to reject room effects and promote a more neutral presentation by emitting audio in antiphase to the 8” driver.

The big surprise is round the back – two rear-facing 8” subwoofers, the reason that what would usually be a low frequency driver at the front is described as ‘midrange’ by D&D, crossover occurring at 100 Hz. The subwoofers contribute to a remarkable low frequency performance for a cabinet this size: in combination with the other drivers and clever digital signal processing (DSP), overall frequency response from 30Hz-20Khz is an eyebrow-raising ±1dB. The onboard amplifiers are Class D, developing 500 watts (LF) 250w (MF) and 250w (HF).

Input, output and mains connections are in a panel below the subwoofers. A female XLR can be configured as either an analogue or AES digital input, selected with a small pushbutton; if digital, there’s a male ‘Thru’ XLR to feed the other speaker of a stereo pair. Also on the panel is an RJ45 connector – while the speaker can function well without it, when connected to a computer with an ethernet switch you gain additional functionality via an internet application.

I got down to listening to and working with variety of sources including CDs, the internet and mastering projects both completed and in progress. During auditions at Lowland Masters over about a week, there didn’t seem to be any need to run the speakers in – they were on point from the start, so it was down to me to tune them to best suit my preference and room with the various tools provided. I’m not a computer buff, but I found the ethernet control very easy to set up, each 8c being immediately recognised and identified via its serial number. The first step was to measure the side and rear wall distances and enter them in the app., so the speakers’ built-in DSP could apply suitable EQ curves – this immediately got things in the ballpark sound-wise. The sub level is also separately adjustable, and once I’d dipped this by a few dBs to tailor the setup even closer to the room’s characteristics, overall presentation snapped into place in a most satisfying way.

The ability of the 8c’s DSP and subs to engage with the front wall as part of the system was soon apparent: on tracks with significant bass content I experienced the heft of large soffit-mounted monitors, yet with commendable clarity and lack of ‘mud’. Response was even and smooth from the lowest to highest frequencies, and I’ve rarely heard such a stable centre image, almost like having an additional monitor there. This is indicative of extremely accurate driver matching and phase response, confirmed in the various measurement plots D&D provide. Anything I played, old or new, was presented in its best light: while balance or other errors were clearly shown, the overall experience was never less than an enjoyable listen. I don’t mind confessing that a couple of times I laughed out loud with the sheer fun of discovery, the music I played giving up its secrets so effortlessly – there were occasions when time seemed to whizz by as I listened to track after track, something I haven’t done in a while.

I could go on, and it wouldn’t be difficult to write well beyond the allotted space about just how good this loudspeaker is. In short, by any measure I can think of, the Dutch & Dutch 8c is exceptional, richly deserving of a listen if you’re looking at monitors in this price range for mastering and general audio tasks.