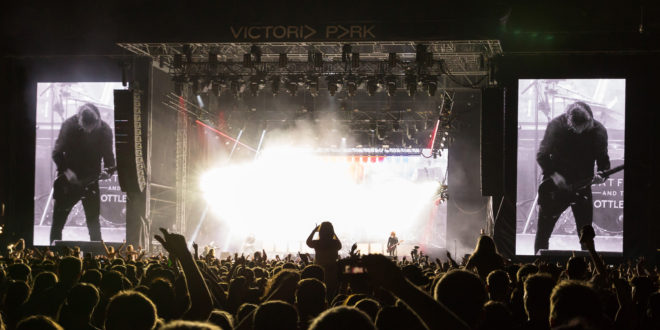 Contrary to what the name may suggest, the All Points East (APE) festival is not a celebration of sitar music in Lowestoft but is, in fact, a ten-day extravaganza located in London’s slightly less Easterly Victoria Park.

The 2018 festival ran with concerts over the weekend of 25-27 May, featuring, among others, Björk, Beck, LCD Soundsystem and The XX, while the ‘APE presents’ strand – running from 1-3 June – offered what the promoters called three ‘huge standalone headline shows’, featuring Catfish and the Bottlemen, The National and Nick Cave and the Bad Seeds.

There was also a midweek British Summer Time festival a-like ‘In the Neighbourhood’ event, offering various free-to-access activities and entertainment in collaboration with the local community, businesses, organisations and suppliers. These included outdoor cinema, live music and entertainment, street food, pop up bars, theatre, arts, sports, wellbeing and children’s activities. Finally on the late May Bank Holiday Monday, the ‘All Points Equal’ event celebrated “100 years of votes for (some) women, and 90 years of equal voting rights for women and men.” So, not your average festival weekend then! In total, there were 99 performances on the programme spread across the eponymous East Stage, the North Stage, the West Arena, the X-Stage and Jägerhaus – I’m sure you can tell who the sponsor of that stage was.

Victoria Park is slap bang in the middle of a residential area, so the sound crew and engineers had to build this into their preparations along with the usual task of coping with potentially recalcitrant musicians and technology. The company to take on this seemingly daunting task was Capital Sound, with Martin Connolly, Capital’s account manager for the All Points East festival, overseeing the technical sound coverage. “Capital have a history of working successfully in Victoria Park where we have supplied the sound for the Field Day festival,” says Connolly. “We also have history working with the All Points East promoter AEG Presents Ltd., so when I was approached by the promoters, Larmac Live, to quote for the sound production for the festival, it felt like coming home – even though it was a new event.”

Of course, the Victoria Park area is also all about ‘coming home’ in a very real sense to many people who live nearby, so the Capital team had to take particular care when sourcing and placing equipment. “With Victoria Park being in a residential area, we know that care has to be taken when designing our systems,” says Connolly. “We always start every potential design for an outdoor show with a blank canvas so we can take into account not only what the promoter wants to achieve but how this can be best done without creating off-site noise problems – which ultimately could lead to licence reviews.”

The venue’s multiple stages all required individual technical solutions. ”With the East and North stages, which were both outdoors, we used Martin Audio’s MLA/MLX system with MLA-C/W8LM delays,” says Connolly. The West stage was a tented venue, while the South stage was a bespoke ‘in the round structure’. For both of these venues, Capital supplied Outline’s speaker systems – the GTO C-12 line-source elements for the former and the Superfly compact line-array for the latter.

“Outline themselves claim that these devices are built specifically for large-scale sound reinforcement applications and Connolly says that they were perfect for use in the festival.

“All of the systems were driven via Capital’s custom digital drive racks with either Lake LM44 or Outline’s Newtons as the processors,” he adds. For such a complex setup, tried-and-tested is almost always a better bet than cutting edge technology, as Connolly explains. “Martin Audio’s MLA (Multi-cellular Loudspeaker Array) is the most controllable system in pro audio and offers great advantages when it comes down to even coverage throughout the site, while being able to keep the lid on offsite noise pollution at the same time as producing the levels at the front of house that engineers really want to operate at.”

Connolly cannot praise the MLA equipment enough, as it enabled Capital and the promoters of the festival to keep audience, sound engineers and local residents happy. “MLA did the trick and once again worked its magic,” he says.

“We were able to give the front of house engineers running levels of 101 to 102dBA, a Leq (equivalent continuous sound level) of 15 with peaks of 108dBA, whilst keeping 0.5dB below the off-site limit of 75dBA.“ These latter sound level measurements were handled by Jim Griffiths and his team from the environmental sound company, Vanguardia. The rest of the equipment supplied by Capital included Avid Venue Profile, Yamaha CL5 and PM5D and Midas Pro 2 desks, with fairly standard microphone packages from the usual suspects of Shure, AKG, Sennhesier, Audio Technica and Audix—though as Ian Greenaway of Lamarc says (see box), pains were taken to make sure the choice of equipment was driven by the need to make the entire day run smoothly. The proof of the audio pudding is always in the aural execution and Matt Crosbie, Nick Cave & The Bad Seeds’ front of house engineer, was mightily impressed.

“The PA system was fantastic and gave me the headroom I needed for a Nick Cave Show. I was very happy!” He says that the Capital crew were more than helpful and pleasant to work with. “I would recommend them in the future – overall, it was one of the easiest and most pleasant festivals I have worked at for some time. Ten out of ten.”

One would expect with an event of this complexity and magnitude, many and multifarious issues and problems with equipment and the talent would emerge to frustrate the technical crew, but Connolly says that it all went very smoothly. “We really didn’t have any issues to overcome as Ian Greenway and his team at Larmac headed off any potential problems before they became real ones.” According to Connolly, the only thing that had to be changed was the front of house position on the South stage, which was moved in the midweek to give better sightlines for the audience. “The entire event was a great success for all involved,” he says. “I’m looking forward to doing it all over again next year.”

A walk in the park: Larmac Live

Ian Greenway is one of two directors of the company Larmac Live and was the production director on All Points East, responsible for providing technical direction and all artist liaison services for the festival. It’s usual for artists to have personal preferences with respect to equipment and this provided a challenge to Greenway’s team.

“We’ll typically get a rider from the artists that lists three or four preferred systems and while we are not governed to supply those, we have quite a task to educate artists and make them comfortable with using new technology,“ he says. Greenway adds that most FOH guys are now familiar with MLA systems, but less so, for example, with GTO.

“My job is to make the show as streamlined and efficient and, to be blunt, as financially effective as possible – we can’t put one of every console under the sun at FOH, it’d become a ridiculous game.” Managing the level of expectations, cooperation and flexibility of the talent is one Greenway’s roles. “That’s where Capital comes in, as we can rely on those guys as they have a great relationship with Martin Audio and can explain what the capabilities of the system are and put that ‘comfort blanket’ in for people.”

Victoria Park is challenging acoustically as to what levels the sound engineers can put both on and offsite, but Greenway says that the levels obtained for the festival far surpassed what has been seen on other shows at this venue. “Once we got everyone to the table, everyone was really content with the results we got – which augurs well for next year’s festival.”