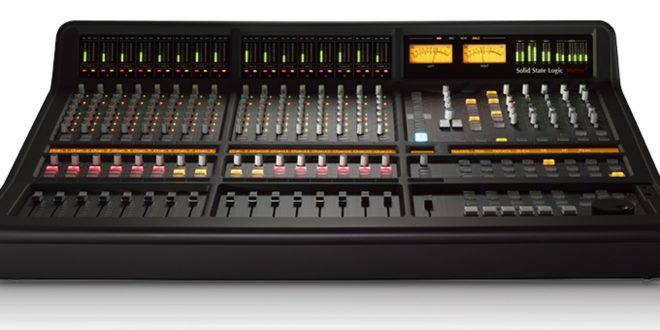 When SSL introduced the original Matrix, many engineers were confused – a smaller format mixing desk with no equalisation or compression built in? In fact, what the company were anticipating was the rise in popularity of the artisan stand-alone preamplifier and audio processor.

If you want to insert SSL processors into your Matrix signal path you can, but you also have the choice of adding a few channels of Neve or API as well if you wish, which opens up the best of all sonic worlds.

The Matrix² Delta (from now on, just the ‘Matrix’) features the same 16 channel, 40 input ‘SuperAnalogue’ line mixer and 16 fader DAW controller as its predecessor, but SSL has upgraded the desk to make it even more useful for today’s production workflow.

The ‘Matrix’ part of the name comes from the desk’s ability to route the sends and returns to sixteen outboard processor units via the channel strip’s insert points.This allows you to quickly insert various combinations of outboard hardware into any of your console channels – this can be done via the supplied Matrix remote software or directly on the console itself.

Using the software, you can set up presets that define the chained hardware via drag and drop, making it easy to create and store setups for different purposes and for many applications, this could replace the traditional patchbay.

The Matrix also features a stereo auxiliary send, four post/pre mono sends per channel and four stereo returns with full mix bus routing. Each channel strip features a switchable input and up to 32 signals can be available for mixdown.

Additionally, there’s a phase reversal and insert button, a gain trim control, routing facilities and solo and mute buttons on each channel. The Matrix has a pair of 12-segment LED ladder meters for individual channels and busses – one for the DAW control and one for the analogue section, while two clear VU meters can display the mix, monitor or record signals.

The Matrix remote software can also be used to save Projects – these are user-configured set ups of the console – but a range of soft keys allow the user to define the routings from the Matrix itself.
Audio signal connectivity for the Matrix is via d-sub (Tascam DB25) sockets on the rear panel.

These include the channel inputs, outputs, DAW returns and your external hardware device sends and returns. The Matrix has as a fully functional monitoring section, featuring SSL’s ‘SuperCue’ zero latency system, along with connectors for mix, monitor and cue on the rear of the console.

Separate main and ‘artist’ monitoring – complete with EQ – can be configured here and there’s a handy talkback microphone with gain knob. There’s a D9 socket on the rear panel available if you want to use SSL’s own ‘Total Recall’ X-Rack system alongside the console. There’s also a USB connection and two programmable foot switch jacks. The 5.1 Surround option is now fitted as standard and is accessed by rear panel d-sub connectors.

Optical interfacing is via AES/EBU XLRs or Toslink, while connection to the computer and DAW is via Ethernet. SSL use ipMIDI to implement this connectivity and, once it’s set up correctly, the desk can act as a DAW controller. The Delta part of the name of the console refers to the implementation of SSL’s Delta console automation system that’s used across its range of consoles. This is a single channel or sixteen channel plug-in that, once inserted in the DAW, can read and write automation from the desk itself, so you can integrate analogue control into your DAW – you’ll need to use an iLok 2 for authorisation of this software.

You can also configure the Matrix to act in HUI or Mackie Control (MCU) modes and the console has the usual transport controls and scrub wheel along with most of the features you’d expect from a well-specified DAW controller – and you can also configure your own MIDI controllers. In MCU mode the Matrix basically acts as a Mackie control and extender combo, with digital scribble strips and displays of plug-in and other parameters. Soft keys can be assigned to useful key commands via the USB connection and DAW profiles can be programmed into four ‘layers’, making it easy to switch between programs.

You can, of course, use the Matrix just as an analogue mixing console – albeit with the ability to use digital ‘scribble strips’, but being able to switch between that and full DAW control is extremely useful. Most of the vPots have ‘Total Recall’ LEDs that indicate when you’ve reached a saved position and there’s a SD card slot for saving Matrix configurations.

The first noticeable physical change in the latest Matrix is the colour and feel of the parts of the desk you’re going to be resting your hands on – it’s now a nice rubbery soft touch. This may not seem important, but it’s likely that an engineer is going to clock hundreds of hours at the console, so user comfort is essential – and the compact nature of the desk, at just 946x724x218 millimetres, means that all controls are in easy reach.

The Matrix can be dropped into a mixer stand, so it should fit into even the smallest environments alongside the chunky external power supply. The Matrix has retained the useful iJack socket for plugging in your phone or MP3 player alongside a stereo headphone jack. The motorised channel faders are what you would expect from a SSL console, featuring the company’s high-resolution Digitally Controlled Attenuator system, rather than VCAs.

The Matrix feels like a ‘proper’ SSL desk and the sonic signature should be familiar to those who use the Duality, AWS, and Sigma consoles.
The Matrix 2 Delta has had some significant upgrades from the previous model and the only way that it could be more useful for this reviewer is if it had multi-channel bi-directional audio interface built in. But perhaps that would detract from the console’s essential analogue nature? In any case, if you want to have the SSL ‘sound’ in a small format console, with flexible expandability, DAW control and 32 input summing and mixing, the Matrix could be your ideal solution.

Want more stories like this sent straight to your inbox? Subscribe to our free daily newsletter here.