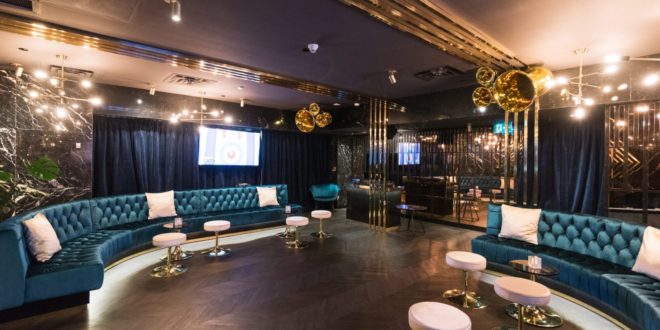 Drake’s chosen sound system for the intimate venue has come from Void Acoustics, with the installation executed by the Void Benelux team.

The project began last summer, with Drake and his business partner Sabah Nissan selecting Horeca Sfeermakers to help facilitate the plans – an agency specialising in bar and club design, based in Rotterdam, Netherlands. Therefore, the entire production, design, furniture and electronics are all Dutch; everything was specially shipped in from the Netherlands to Canada.

A combination of two Air Motions, four Airtens, two Venu 215s and eight Cyclone 55s, all in a high gloss black finish complete the sound in the bar-club and restaurant. For the VIP area of the club, a further two Air Motions and two Airtens in a customised chrome gold combine with a Venu 215 and Venu X subwoofers. All of the subwoofers are discretely hidden away in the interior beneath the sofas.

Void Benelux flew in from Amsterdam to ensure the installation went exactly as planned, with Robert Hofkamp – Director of US operations for Void assisting the team.

Managing director Wesley Pierik said: “We have previously worked with Sabah Nissan, where he has a similar Void system in his Amsterdam venue The Alley – a restaurant that turns into a bar and club over the evening, just like Pick 6ix. Sabah was so amazed by the sound quality and versatility of his existing Void system that he wanted a very similar setup in this partnership venture with Drake”.

Wesley explained that a number of challenges had to be overcome, including the restaurant ceiling being covered by a wooden skeleton structure. “Fitting the Air Motion speakers in-between was a very precise job so we decided to fly to Toronto to make sure that every detail was thoroughly planned for, right down to the type of brackets used. I am happy we took this path because the end result turned out to be stunning and the clients are very happy”.

In working for such a high-profile client, who is himself a successful musician, only using only the best engineers in the industry, the speaker installation had to be of the highest standard. It was testament to Void Benelux’s skill to be told by both Drake’s righthand man, Nessel ‘Chubbs’ Beezer, and his chief sound engineer, Noel Cadastre, that they were “blown away by the quality and impact of their new VOID system” – the best outcome Wesley’s team could wish for.

Want more stories like this sent straight to your inbox? Subscribe to our free daily newsletter here.