Home / Feature / Analogue vs. Digital: Is the war over yet? 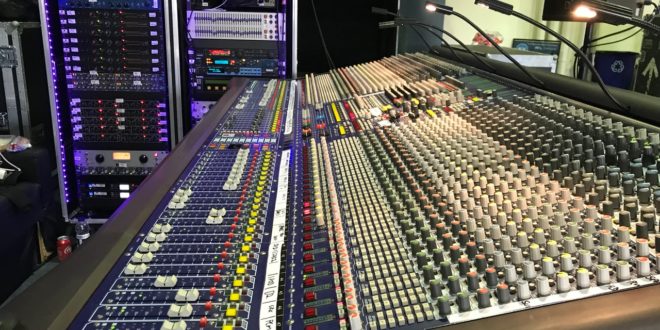 Analogue vs. Digital: Is the war over yet?

When we look at things from our past they generally have a sheen of rose tinted-ness to them as we fondly remember a quieter, less stressful time where bands were better and great songs were made with things like melody and rhythm and meaningful lyrics; where you could pour over album sleeves reading every piece of information and dreaming over the images that were inside the double gatefold sleeves showing some glamorous life that only rock bands knew. Nowadays we just stream individual songs by artists we don’t even know the name of because Spotify happened to pull that one out of the bag, and suddenly album art isn’t even a necessary option for a band either.

So what has this got to do with live sound? Well, in the “olden days” we could only use analogue mixing desks going down analogue lines into analogue amps coming out of heavy speakers in even heavier boxes. Today the options are far greater. But do we look back at some of that old gear and think it sounded better, or is that just wishful thinking?

I have been mixing live sound for over 20 years and I would say maybe half of that, the last half, has been mainly using digital desks. The first digital desk I got to use was a Yamaha PM5. Since then I have used pretty much every single professional digital console on the market from Midas, Digico, Digidesign, SSL, Allen and Heath, Yamaha and Soundcraft, even crossing paths with digital desks from Roland, Behringer and Presonus. But in the early days I cut my teeth on analogue gear, settling on the Midas sound as my preference.

Though I regularly used Yamaha and Soundcraft desks which both did a good job, Midas seemed to dominate when sound quality was assessed. I was able to hone my craft in the digital domain because you have so many options at your finger tips, from multi-band compression to dynamic EQ and infinite level settings, so you can tweak the sound and have a mix that has taken you years to perfect as you save your desk file and play with it at every show.

You can have compressors coming out of your ears on every single channel and fiddle with absolutely any single aspect of the signal chain, a luxury we only dreamed about in the good old days. Back then we had to prioritise which channels got the only four compressors in the rig and as for support bands you could maybe share the hi-hat and over head channels, but be left with the last nine channels on the end of the desk to mix your band with. As for dynamics, I’m sorry support band engineer, but there’s none left.

With all these tools at our finger tips why would anyone go back and try and do a tour with an old analogue set up? Surely the digital desks have come on so far that they sound better than the old analogue ones? Well, at the end of last year I got to find out for myself if this was the case.

For years now I have wanted to go back to touring a Midas console with analogue outboard but there have been many reasons that I haven’t been able to including budget restrictions, truck space, FOH footprint, laziness because I can’t just load yesterdays file etc. I’d always joked with production managers or tour managers about it. Wouldn’t it be nice to [tour with an analogue desk] and we laughed and they all said, No. But, for some reason, this time I got the green light. I was about to do an arena tour for James Arthur and the band were going to play fully live without any backing tracks so I thought it made perfect sense to try this. I was so excited, yet worried if it would live up to the past memories of warm fat drum sounds and three dimensional definition in the summed mix or would everyone think I was crazy for wanting to tour such a big board.

I spoke to David Shepherd of BCS Audio who were supplying the PA for the tour and asked him how he thought we could work this out. They had a Midas H2000 sat in the warehouse and lots of nice outboard gear getting dusty in shelves. I put a wish list of gear together and between what I wanted and what David had we put together what can only be described as a rack of awesome. 8 x DBX 160’s, Summit DCL 200 and 2 x Summit TLA 100A, 2 x Distressors, BSS Multi Comps, Drawmer gates. Klark Technic Graphics and a set of Yamaha, TC Electronic,  Lexicon and Eventide Effects.

It was a sight to behold all crammed in to one massive rack, put together beautifully by PA tech Daniel Draper from BCS Audio. In fact it was so big that on the first day of production rehearsals they had to take the door frame off so it would fit through the main door of the rehearsal room. Never had this been a problem with my USB stick.

Once we had everything set up and the band miked, the fun began. We were still using a digital monitor board for the band’s in-ears. Monitor engineer Nico Antonietti was using a Digico SD10 with an SD Rack. I took an analogue split to FOH so had 48 channels of analogue multi. Luckily for me this fit the channel count that I needed for the nine piece band on stage.

The MD Dan Bingham had decided that the band were not going to be playing to a click so there would be no backing tracks and they would play everything live, so this old school approach seemed to compliment my choice of analogue set up. Having this many musicians on stage I was concerned that we might have exceeded the channel count but that turned out not to be the case. In fact the only issues we had, when adding new channels to the set up, was at the digital end because the SD Rack was being fully utilised for not only the inputs but also the many outputs needed for the in-ears etc.

My Midas was loaded with 40 mono channels and eight stereo channels so I had plenty of space to return my Effects units, iPod etc on top of all the channels from stage. I think we finished with only one side of a stereo return free and one mono channel not being used. So how did it sound? I think it sounded amazing. I absolutely loved using this set up. It was so much fun mixing on the Midas and with the band playing so dynamically with such soul this set up translated it superbly. And just as a double check, we had the opportunity during production rehearsals to run a digital desk side by side with the Midas.

Yes, we did set this up to mix the band too and we were able to A-B both desks using the same sources and there wasn’t a single person in the room that thought the digital sounded better.  So no, I do not think that digital desks sound better than the old high-end analogue ones which is a shame really as so many young engineers today have never mixed on an analogue desk so may never know the difference. Yes, you can do almost anything with digital desks now and the flexibility to just load up your file and go is great but when it comes to sound quality, I’m sorry, but analogue wins hands down. Hopefully we will get to the stage when we can have the advantages of a digital set up but with the sonic qualities of the analogue desks.