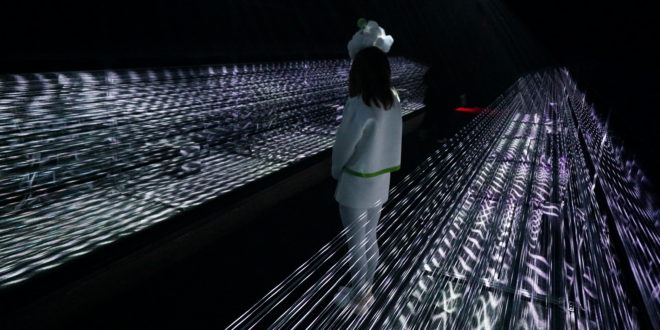 Now in its second year, Lost In Music is a Sony campaign targeting 18-25-year-olds that combines Sony artists with Sony technology. The campaign has featured a series of immersive concerts, the first of which kicked off with a session with Khalid in Los Angeles on 19 January 2018 at the LA Hangar, leading up to a showcase at SXSW in Austin.

Ralph Creative is the brand experience agency responsible for creating the shows. “Sony got us to pitch a couple of years ago,” explains chief executive and co-founder Chris Hassell. “The part that we work with is their business development section, so essentially the part that gets all the different business units to work together.

“They brought us in saying they wanted to use Sony technology and Sony music and Sony artists, so our brief was to create new music experiences and we spent ages trying to figure out what that meant,” he continues.

“We knew from the brief that they wanted to create live music events – and then you start digging into it and ask, How can you improve on the live music experience when it’s already pretty great?

“You don’t want to ruin an artist’s performance when people are there primarily to see and listen to the artist. So that’s interesting, because in the first year of Lost in Music the key technology was PlayStation VR.

“They wanted to mix VR with Sony music stuff. So we went through all these ideas, things like, do you put headsets on people at gigs? That’s making the live experience worse though. It’s not sociable. So with the live events we essentially took inspiration from previous work we had done and borrowed from immersive theatrical stuff like Punchdrunk and even Secret Cinema and that kind of stuff where you can add this whole other level that doesn’t detract from what the core event is.

"For the live events for Lost In Music, what we did was as if Willy Wonka was putting on a gig in his factory.”

In addition to the live shows, The SXSW showcase saw the incorporation of a demonstration of Sony’s Sonic Surf VR, the company’s new immersive audio technology, which "combines new multi-channel speakers and specially developed software, designed to simulate popping, moving, and partitioning sounds in one space using an intuitive software application".

The demonstration, called the Acoustic Vessel “Odyssey”, allowed visitors to immerse themselves in music using 576 speakers controlled by its sound field synthesis technology. The audio was created by Tokyo-based sound artist Evala.  The  Acoustic Vessell  "Odyssey" was built around a 50ft tunnel used to house the acoustic performance.

Guests were able to undertake an epic journey spanning city-scapes and lush forests, the depths of the ocean and even the outer reaches of the solar system. The audio was accompanied by a pioneering light installation created by Mimi Son and Elliot Woods, known as Kimchi and Chips.

“The Acoustic Vessel Odyssey is the result of combined efforts between sound artists and engineers to create an immersive experience like no other," continued Anan.

"Guests can travel through a universe of sound created through Sonic Surf VR, Sony’s spatial audio technology, and 576 speakers. Entering this experience, you feel as though you have warped through space in an instant, and are enveloped by sounds reminiscent of traveling through a city, a forest, wading through water, and even outer space.

"The audio is accompanied by a pioneering light installation. “Odyssey” is meant to transport guests from the real world into the imagined world of “dreamscape”, where guests will enjoy live performances of various Sony Music artists."