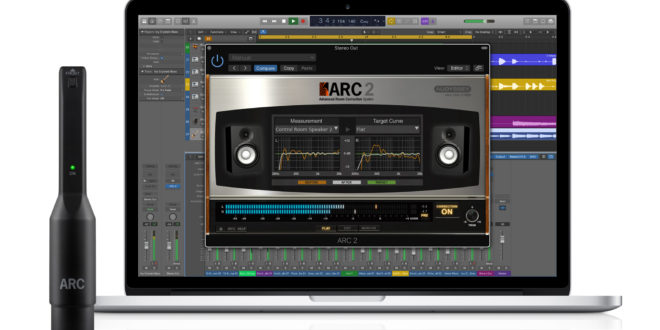 The basic premise of the ARC is simple – use the measurement microphone to capture a test-tone sweep, analyse the resultant waveform and attempt to correct in software for any problems detected in the audio over the useful frequency range. The problem – especially with smaller box-shaped rooms – is that these inconsistencies are not the same wherever the listening position is.

In my workspace, quite small movements of the head can bring about large changes in apparent frequency response – especially in the bass. Normally, I’d attempt to correct these issues with high and mid frequency absorbers (easy and effective) and bass trapping (more difficult and impossible to fit into a small room) but I’ve not been able to improve the acoustics to any appreciable degree. ARC attempts to overcome these problems by analysing the audio in multiple positions – IK multimedia recommend between seven and sixteen measurements should be taken over the ‘listening area’.

Obviously, you need to provide an audio interface with a neutral and high quality signal path – so all direct monitoring and DSP processing there needs to be switched off. ARC works at 48kHz and the microphone requires 48v phantom power.  The analysis software runs in stand-alone mode and is pretty simple to use, leading you through the process step-by-step. You need to adjust the output levels of your monitors to that required by the software, but again the ARC helps you along. The room needs to be in the same condition as you normally work in – so you need to close the doors and draft in your colleagues if you usually collaborate.

Once the levels are set, the ARC software walks you through a series of measurements to capture the frequency response of the room. Multiple measurements can be saved – in my case I measured with one and two people in the room, as that’s how I usually work. Instancing the ARC plug-in on the Master output of your DAW is where the magic happens and loading the previously saved room corrections will display the room nodes and the correction that ARC has imposed upon the output for both channels alongside a definable ‘target’ curve. A peak meter displays the input and output levels passing through the plug-in. One of the nice things about ‘virtualising’ your monitors is that ARC can then emulate several different auditioning systems without going to the faff of getting another boom box off eBay. The laptop speakers setting proved particularly effective in testing mix translation, as did the ‘‘80s (Yamaha NS10) setting.

ARC also acts as a software monitor controller whose parameter scan be assigned to MIDI-based hardware for a more tactile experience. One of the problems with using this type of correction software is that you must disable the plug-in before bouncing your final mix – something I didn’t do several times during the review period. This is easy to forget when you’re working to tight deadlines – and who isn’t? I use a Mac and although there are some third- party solutions that allow you to instance AU plug-ins on the master output of the computer, these are inelegant in use. It would really help if you could load a plug-in directly onto ASIO or CoreAudio drivers themselves.

Once the corrections had been performed, I instanced the ARC plug-in on Logic Pro X 10.4’s master bus running on a 4-core 2010 Mac Pro and proceeded to mix some new material and remix some pieces I’d attempted using that old technology – listening to lots of familiar material and trying to extrapolate how the bass actually sounds.

Not surprisingly, when bypassing the plug-in, the unprocessed audio behaved unpredictably, with nodes appearing whenever I moved my head. Probably the most impressive aspect of the ARC was that, when enabled, the low frequency response was pretty consistent over the area I’d calibrated for. It became much easier to hear what the bass was doing during a mix and these translated – with a slight but consistent midrange uplift tweak using ARC’s curve editing facilities – to all of my go-to mix check systems.

Because of the size of my room, my ATC SCM 16A monitors are squeezed right against a wall – not ideal at all. I tried moving them to a more ‘natural’ position to see how the software coped and it did so admirably. Thenodes generated were different, but the correction was just as effective as with the speakers back against the wall – so  I still have space to swing a cat should I choose to do so (and, of course, record the resulting noise). The software has some extra correction facilities to compensate for potential stereo placement and bass issues that may be created when over compensating for the leanness of smaller speakers, so you should be able to get acceptable results whatever the situation.

The ARC correction provides a more reliable auditioning environment than a bodged acoustically treated space – I should know, I’ve created a few. It’s rare these days that I work in a ‘proper’ acoustically treated space, so being able to quickly adjust to any room I find myself in is going to be a godsend. I’m going to carry the MEMS microphone in my portable rig from now on – I can also use it as an extra room mic if I need one! I was impressed with the results of the ARC system in my compromised space and, when I’m back in a ‘proper’ studio, I’m looking forward to seeing howARC 2.5 might work in those conditions as well.