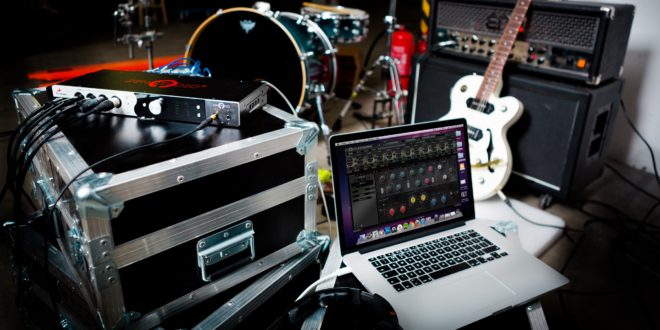 I remember when the original Zen Studio interface was launched by Antelope Audio, unmissable in its striking red outfit. At a time when interfaces were becoming more compact with greater connectivity options, the Zen Studio was the surprise that kept other manufacturers on their toes. The original Zen Studio’s 12 mic pre’s and handy mobile case, made recording a band on location both feasible and simple.

With the release of the Zen Studio+ I was keen to see what surprises Antelope had packed this time. At first glance there doesn’t seem to be many major differences, but from a company who have a reputation for ‘mic-dropping’ in front of the competition, I knew this needed close attention.

Immediately we can see that the bright red colour has been changed to a smart silver and black design, leaving just the logo in red on top. I don’t think we should typically worry about the colour of gear, but in this case I think there is some significance. Clearly the Zen Studio+ is less recognisable as it’s predecessor, except the distinctive handle on the side. This does of course bring the unit in-line with Antelope’s other interfaces, in their perhaps overly-extensive product line. The Zen Studio was starting to look astray from their other products, and was certainly the next unit due a re-vamp.

The main significance about the colour change for me however, is down to some new toys on the market by a certain brand name beginning with ‘F’. These afore mentioned interfaces have taken the market by storm, and in my opinion lead the way in sonic quality. Antelope’s USP is different though, typically offering the solution to the question; “if only there could be an interface that did x, y and z”.

There’s nothing new about the number of mic pre-amps this interface offers, but 12 is still 4 more than most other manufacturers offer in 1U. There are still; D-Sub connections for additional line inputs and outputs, word clock connections, dedicated monitor and dual headphone outputs, two ADAT connections and S/PDIF. What’s new, are two guitar re-amp outputs and built-in talkback on the front panel, plus a Thunderbolt port on the rear. This leaves the Zen Studio+ very well equipped and current. Whilst these aren’t massive changes, I think this demonstrates how forward thinking the original unit was, and still is to be honest.

I can see how useful guitar re-amp outputs will be for many, especially those in project or home studios. The built-in talkback however, I feel is key to the Zen Studio’s success. This unit was always built as a mobile unit that you could feasibly record an entire band with at a rehearsal room for example. Talkback is something I wish more manufacturers built in to their products, otherwise you end up sacrificing one of the high-quality pre-amps for this mundane but necessary requirement.

The big news for many however, will of course be the Thunderbolt connection and improved on-board FPGA DSP power. Just before you rush out and buy one though, Antelope still have some work to do. Unfortunately the Thunderbolt port is for Mac users only, with working PC drivers still being promised. What’s more, while other manufacturers are shouting from the roof tops that their Thunderbolt technology provides extremely low-latency connectivity, Antelope only advertise the additional channel count achievable via Thunderbolt.

This being said, at least we have a very versatile unit here that does offer dual connectivity options. The market is looking more scarce everyday for those that are only able to use USB interfaces, so this is definitely a string to Antelope’s bow. Once connected, the software which operates the Zen Studio+ is excellent. While confusing at first glance, the routing options are extremely versatile. You can run up to 4 independent mixes with built-in reverb and effects via the zero-latency DSP engine. Antelope also offer mobile control apps for that modern ease-of-use we’re becoming accustomed to.

As I said earlier, I believe the ‘F’-word of interface brands with their ‘C’-word range of Thunderbolt units are sonically smashing it at the moment. The pre-amps on the Zen Studio+ are very good and were renowned on the original model. I’m not aware of any significant improvements in this latest model however. The clocking also appears to be the same with only a small improvement to the converters. This isn’t a negative point of course, because Antelope have had good solid tech in this department for a while. If you’re considering one of these interfaces because of the multitude of selling points, then the sound of the hardware won’t disappoint.

One of the areas which sets the Zen Studio+ apart, is of course the on-board FPGA FX. This is something that many brands are shying away from. As we all know, this is thanks to another nameless brand beginning with ‘U’. If you’re after a ‘cheaper’ alternative to hardware-based DSP solutions, which seems to be getting thinner than ever before, then Antelope are that alternative. For me, this is how Antelope justify the price of the Zen Studio+. It might not appear particularly cheap in comparison to some solutions until you realise all the on-board FPGA FX are free.

Antelope have been releasing firmware updates for their hardware regularly, providing new internal effects. Users can make the most of these developments, loading the most recent firmware releases straight to their devices. Personally, I don’t see myself planning to mix ‘in-the-box’ and utilising this DSP power alongside my DAW anytime soon. When recording however, these are very powerful tools which bring back the art of tracking in a well-equipped studio anywhere you are.

The Zen Studio was certainly due an update. The resulting Zen Studio+ will continue to fly the Antelope Audio flag high. There aren’t really a shocking number of improvements with this new model, but some modern refinements. Unlike the dramatic entry the original unit made a few years ago, this one still delivers everything we fell in love with, but for 2018. Thankfully Antelope Audio have recognised what an eye-opener it was and kept the story alive.

The entire product range by Antelope Audio almost fills the gaps between every other manufacturer, and everything in between. Of those solutions, the Zen Studio will always be the original in my eyes. Next time you’re wondering what alternatives there are, take a look at Antelope Audio.